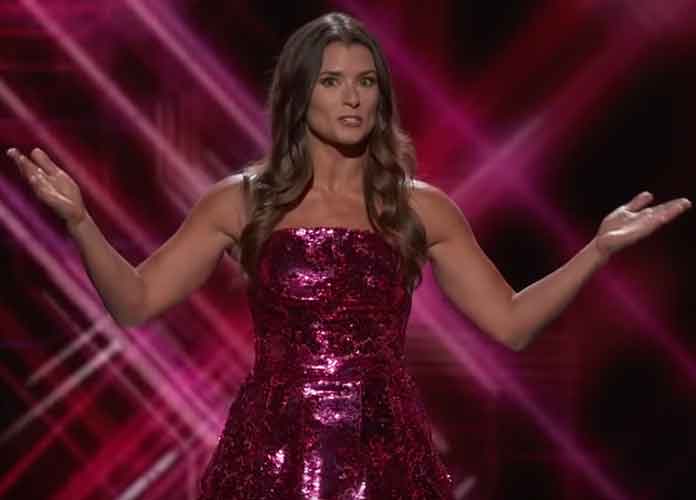 Patrick, 36, made history as the first woman to ever host the awards show — which is often called the “Oscars of sports” — and poked fun at this at the very start of her opening monologue.

“It’s true, the ESPYs have never had a host like me before,” she said. “As you can see… I’m their first race-car driver! So obvious.”

Patrick then went on to mercilessly roast dozens of athletes and sports teams, referencing major events that happened over the last year.

“For the last 25 years the ESPYs have been about celebrating the magic of sports,” Patrick continued. “No matter what else is going on in the world, sports have always had the power to inspire and give hope… Unless those people are from Cleveland,” she added to laughs, as the camera panned to a slightly smiling Kevin Love, a player for the Cleveland Cavaliers. Patrick was likely referencing the Cleveland Browns‘ winless (0-16) season last year, the latest in a long streak of terrible campaigns for the NFL team.

“I haven’t seen a Russian this pleased with Washington since, well… two days ago,” she quipped.

Patrick also ribbed the U.S. Men’s National Soccer Team for not qualifying for the 2018 FIFA World Cup, and congratulated France for winning the tournament, and Cavaliers star J.R. Smith for his key mistake against the Golden State Warriors during the NBA Finals. Most of the host’s jokes did not seem to land too well with the crowd.

Patrick and her Green Bay Packers quarterback boyfriend Aaron Rodgers also spoofed the Oscar-winning movie I, Tonya, which detailed the rise and fall of American Olympic figure skater Tonya Harding. The parody at the ESPYs was a trailer for a fake film called Me, Danica that saw Patrick portray herself as a trashy race-car driver who had a tough upbringing and got caught in a major scandal like Harding.

Among the other major highlights of the night was Buffalo Bills legend Jim Kelly, a Hall of Fame quarterback who was diagnosed with oral cancer. Kelly delivered a moving speech while accepting the Jimmy V Award for Perseverance.

Many current and former members of the U.S. women’s Gymnastics Olympic team also took the stage to accept the Arthur Ashe Courage Award in one of the most powerful moments of the ceremony. In total, 141 women who are or were members of the team stood onstage to accept the award. What they all had in common: every one of them was a survivor of sexual abuse from Larry Nassar, the Olympic team’s doctor and former Michigan State physician who was sentenced to prison in January for his crimes.

Larry Nassar survivor before receiving this year’s Arthur Ashe Courage award alongside sister survivors: “If we have to walk this journey to make sure that no other little girl has to walk this journey, then that’s exactly what we’re going to do.” https://t.co/T3gtmmd6PF #ESPYS pic.twitter.com/Ua4q0ndhSU

Aly Raisman, a gold medallist who became one of the leaders of the movement to help the women speak out about their experiences with abuse, gave a rousing speech about striving to encourage young girls everywhere to make their voices heard about assault and to end corruption that aims to silence women on this issue.

“To all the survivors out there, don’t let anyone rewrite your story,” said Raisman. “Your truth does matter. You matter and you are not alone.”

.@aly_raisman bravely reads out all the years during which women reported Larry Nassar’s abuse: “To all the survivors out there, don’t let anyone rewrite your story. Your truth does matter. You matter and you are not alone.” https://t.co/SrcAMqxyM8 #ESPYS pic.twitter.com/jvooBvHRf4

The survivors earned a standing ovation after Raisman’s speech.

Another powerful moment came when the families of three coaches who were killed protecting students during a shooting at Marjorie Stoneman Douglas High School in Parkland, Florida in February accepted the Best Coach of the Year Award alongside the school’s football coach Elliot Bonner.

“It’s not a political issue,” Bonner said in his speech. “It’s a human issue. Lives were lost that didn’t have to be.”