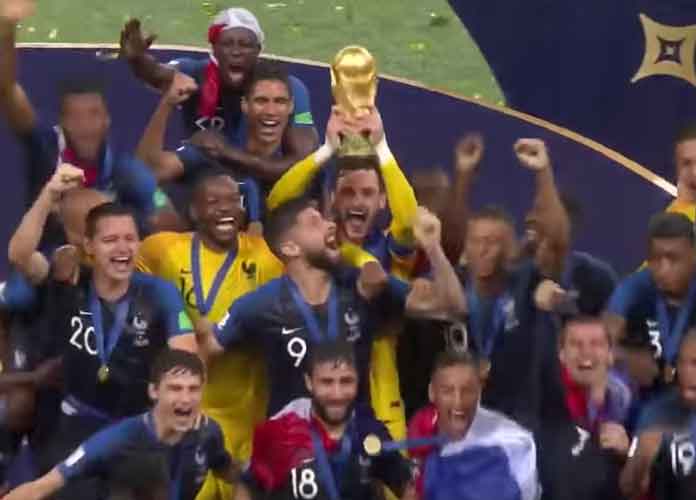 France won its second FIFA World Cup title on Sunday after defeating Croatia 4-2 in the final at Luzhniki Stadium in Moscow, Russia.

The victory was particularly meaningful for France, as it came 20 years after they won their first World Cup trophy in 1998, the year the country hosted the tournament. France’s head coach on Sunday, 49-year-old Didier Deschamps, was the captain of that 1998-winning team. France also lost the Euro 2016 final to Portugal in Paris, so Sunday’s win was a great way for the French to bounce back to victory.

This was also the World Cup final with most goals scored since 1966, when England defeated West Germany 4-2 in London to win its first-ever title.

Here are some of the top moments from Sunday’s game:

Les Bleus opened the scoring 18 minutes into the match with an own goal from Croatia, who were playing in their first-ever World Cup final. Atletico Madrid star Antoine Griezmann took a free kick after he was fouled just outside the box. Mario Mandzukic, who scored Croatia’s game-winning goal against England in the semi-finals, jumped to head the ball, but it flew behind him and into his team’s own net.

Croatia ties it up

Croatia tied it 1-1 almost exactly ten minutes after France’s goal. After a Luka Modric free kick and a few headers in the box, Ivan Perisic takes down the ball, makes a quick touch and fires it past goalkeeper Hugo LLoris. The shot reportedly brushed against French defender Raphael Varane’s hip.

In the 34th minute, Griezmann takes a corner kick and France’s Blaise Matuidi heads the ball wide of the near post. However, the French start imploring the referee to check for a handball on Perisic. After a three-minute video assistant referee (VAR) review, France is awarded a penalty and Griezmann successfully fires a low shot to send goalie Danijel Subašić the wrong way and put his team up 2-1.

In the 52nd minute, four anti-Kremlin protestors stormed onto the field. It was later revealed that the woman and three men — who high-fived or otherwise touched some of the players and were quickly removed by security — were members of the Russian punk rock group and political activists Pussy Riot. The foursome were dressed in police uniforms because they were attempting to make a statement about the corrupt nature of public servants in the country. The protest was also likely a statement against President Vladimir Putin.

Manchester United midfielder Pogba had delivered many solid defensive saves this World Cup, but his shining moment came in the 59th minute, when he scored his first goal of the tournament. After Kylian Mbappé raced down the line, he fed Griezmann, who in turn tapped the ball to Pogba after a few quick juggles. The Manchester United star fired a first shot from just outside the box that was blocked by a Croatian defender, but then comfortable slotted a high shot to make it 3-1.

Six minutes later, 19-year-old Mbappé made history by becoming the second teenager to score in a World Cup final after Brazilian legend Pele did it twice in 1958 at age 17. The Paris Saint-Germain forward took a pass from Lucas Hernandez and fired a low shot from well outside the box that left Subasic stunned and made it 4-1. The crowd of French fans at Luzhniki Stadium roared even louder.

Four minutes after Mbappé slotted home, Croatia got its second goal after Lloris made a terrible mistake that could have been easily avoided. After taking the ball and facing a pressuring Mandzukic, the French goalie tried to take an extra step to beat him and then kick off, but the ball ran into the Croatian star’s foot and Mandzukic simply tapped it in from about two yards out to redeem himself for his early own goal and make it 4-2.

France’s players danced, jumped in elation and even gathered to pick up Deschamps and toss him in the air as rain poured down in Moscow.

Many famous athletes and other celebrities, as well as other fans, also took to social media to congratulate France on their victory or comment on the final:

Putin gets an umbrella ☔️ but makes France’s Macron and Croatia’s Grabar-Kitarović stand in a downpour. #WorldCup pic.twitter.com/q1Lscigcqa

Congratulations to France, who played extraordinary soccer, on winning the 2018 World Cup. Additionally, congratulations to President Putin and Russia for putting on a truly great World Cup Tournament — one of the best ever!