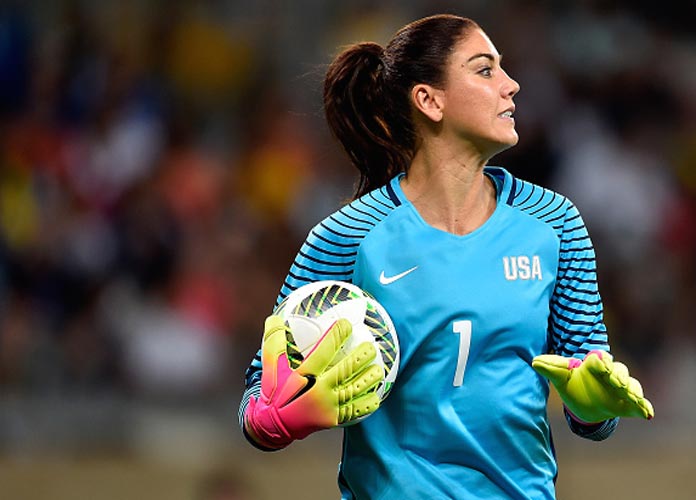 BELO HORIZONTE, BRAZIL - AUGUST 03: Hope Solo #1 of United States looks on during the Women's Group G first round match between the United States and New Zealand during the Rio 2016 Olympic Games at Mineirao Stadium on August 3, 2016 in Belo Horizonte, Brazil. (Photo by Pedro Vilela/Getty Images)

U.S. Soccer has announced that Hope Solo has been suspended from the U.S. Women’s National Team for six months following the goalkeeper’s comments on Sweden’s performance in the Olympic quarterfinal match that saw the USWNT eliminated from the Rio Games.

Solo’s national team contact has also been terminated. The 35-year-old American goalie said following the quarterfinal match that she believed the Swedish women were “a bunch of cowards” for using a defensively-minded strategy to win the game, adding “the best team did not win.”

Sweden earned the victory on Aug. 12 via a penalty shootout following a 1-1 tie in regulation.

U.S. women’s coach Jill Ellis and U.S. Soccer general secretary Dan Flynn met with Solo in Seattle on Wednesday afternoon and gave her the news, which comes with three months of severance pay. She will become eligible for reinstatement and a new contract in February 2017.

Solo, who received public criticism from teammates Megan Rapinoe and Alex Morgan, as well as U.S. Soccer president Sunil Gulati for her comments, did not immediately apologize for them.

Instead, both Morgan and Rapinoe said they believed Sweden, as the underdogs, used the right strategy to play a team as strong as the U.S., the reigning women’s World Cup champions, almost hinting that the Americans would have also played more defensively than offensively had the situation been reversed.

“They played their cards right,” Morgan told USA TODAY’s Nicole Auerbach. “They did the exact same thing with Brazil. They’re in the final, so you can’t really doubt their strategy now.”

“I saw [Solo’s] comments but I feel like those are opinions I don’t share,” Morgan told Auerbach.

Rapinoe was more direct in attacking Solo for her comments.

“[I’m] really disappointed to be honest,” Rapinoe told NBC. “That’s not our team. That’s not what this team has always been. That’s not what this team will be in the future. It’s frustrating sometimes as an athlete. You’re thrust into the spotlight and I think this team has always done a really amazing job of understanding that we have this incredible platform. Let’s do something good with it. Let’s inspire. Let’s be [expletive]. Let’s be fierce. Let’s be competitive.”

“But we’re gracious and we are humble. We play the game a certain way. Whether we win or lose. We’ve been on the winning side quite and bit and when we find ourselves on the other side, we need to handle that graciously. Unfortunately, that wasn’t the case.”

Gulati then issued a statement of his own.

“The comments by Hope Solo after the match against Sweden during the 2016 Olympics were unacceptable and do not meet the standard of conduct we require from our national team players,” Gulati said in a statement Wednesday evening. “Beyond the athletic arena, and beyond the results, the Olympics celebrate and represent the ideals of fair play and respect. We expect all of our representatives to honor those principles, with no exceptions.”

The women’s national team has just two more matches scheduled for the remainder of 2016. Solo can still play for for her club team, Seattle Reign, during the suspension.

Gulati continued: “Taking into consideration the past incidents involving Hope, as well as the private conversations we’ve had requiring her to conduct herself in a manner befitting a U.S. national team member, U.S. Soccer determined this is the appropriate disciplinary action.”

Some reports have confirmed that, because U.S. Soccer also pays her club contract, only the national team portion of her contract was revoked.

“During our current National Team camp, Hope made a poor decision that has resulted in a negative impact on U.S. Soccer and her teammates,” Ellis said in a separate statement. “We feel at this time it is best for her to step away from the team.”

Of course, many will surely argue that the punishment handed to Solo seems excessive given her transgression, and others might even complain that a punishment this severe would probably never be given to a male player for making comments like hers.

Rich Nichols, executive director of the USWNT Players Association, is one such person who quickly rose to Solo’s defense.

Solo then responded to the suspension with an apology, saying: “I apologize for disappointing my teammates, coaches and the Federation who have always supported me,” she wrote. “I think it’s best for me to take a break, decompress from the stress of the last several months, and come back mentally and physically ready to positively contribute to the team.”

Hope Solo’s response to SI on her suspension. pic.twitter.com/Y5E5KcrECo

This is not the first time, however, that Solo has received punishment for something controversial she has said or done.

At the 2007 World Cup, U.S. coach Greg Ryan benched her for the semifinal against Brazil after she had started every game. Solo lashed out publicly after the U.S.’s 4-0 loss and was shunned by her teammates, but ultimately Ryan lost his job and Solo was welcomed back to the U.S. team under coach Pia Sundhage and won a gold medal in 2008.

After Solo’s standout performance at the 2011 World Cup, where the U.S. finished second, she became a breakout personality and ended up on Dancing With The Stars.

In 2014, however, she was accused of a fourth-degree domestic violence offense in an incident involving her nephew and half-sister. That case has yet to be resolved. In early 2015, Solo was suspended for 30 days by U.S. Soccer after she and her husband, Jerramy Stevens, were stopped in a U.S. team van that Stevens was driving in Los Angeles. He was charged with DUI and served three days in jail.

Solo and the USWNT have won one World Cup (2015) and two Olympic gold medals in a U.S. career that has included 202 national team appearances and 102 clean sheets. Both are the most ever internationally for a goalkeeper, male or female.

BELO HORIZONTE, BRAZIL – AUGUST 03: Hope Solo #1 of United States looks on during the Women’s Group G first round match between the United States and New Zealand during the Rio 2016 Olympic Games at Mineirao Stadium on August 3, 2016 in Belo Horizonte, Brazil. (Photo by Pedro Vilela/Getty Images)

Kareem Hunt Suspended For Eight Games Playing With The Browns