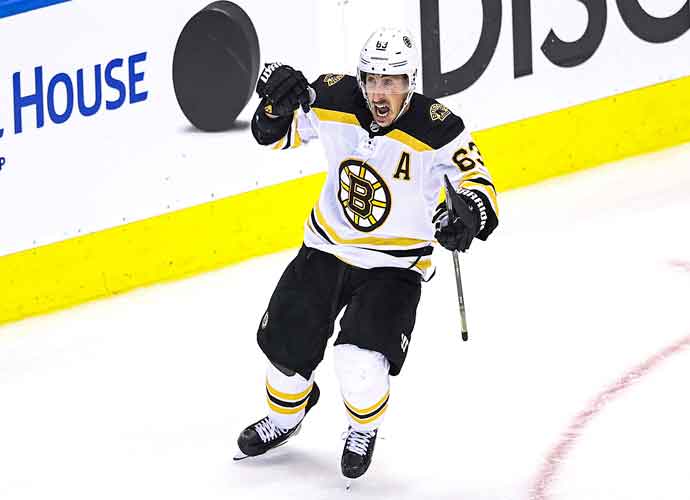 For the eighth time in his career, and second this season, Boston Bruins winger Brad Marchand has been suspended. This time it’s for six games, for roughing and high sticking against Pittsburgh goalie Tristan Jarry.

The ban was announced following an earlier in-person hearing with Marchand.

He was already suspended once this season for three games, when he slew footed Oliver Ekman-Larsson. And, with two five-game bans under his belt, NHL Player Safety decided to give him the longest suspension of his career.

“Players who repeatedly violate league playing rules will be severely punished for each new violation,” Player Safety noted in a video. “Marchand has been suspended seven times and fined five times previously.”

This most recent incident occurred during Pittsburgh’s 4-2 victory over Boston on Tuesday. With the Bruins trailing by two with less than a minute to play, Jarry apparently said something to Marchand and the latter took a swing.

The punch, of course, drew the ire of several Penguins. A donnybrook ensued and the chaos earned Marchand a five-minute match penalty for attempt to injure and a two-minute call for roughing. As the anarchy happened in the game’s final minute, it was automatically subject to NHL review.

“It looked like some words were exchanged,” Bruins coach Bruce Cassidy said. “I don’t know if there was an incident at the end of the second period that precipitated it. I was in the room, so I don’t know. Someone said that. Still, you’ve got to have better discipline at the end of the day. Brad’s a leader on our team. He needs to control his emotions in that situation.”

“I think it’s just the heat of the moment,” Jarry said. “Everyone’s battling hard out there … it’s part of the game, and [what happened] stays on the ice.”

Marchand leads the Bruins in scoring this season with 21 goals and 49 points.