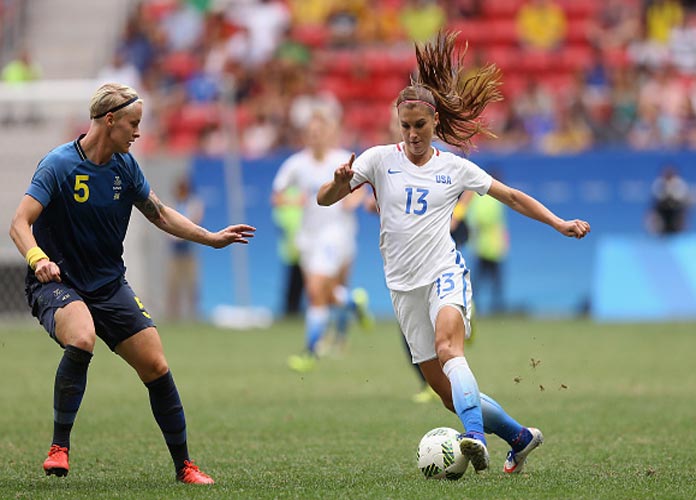 BRASILIA, BRAZIL - AUGUST 12: Alex Morgan #13 of United States controls the ball against Nilla Fischer #5 of Sweden during the Women's Football Quarterfinal match at Mane Garrincha Stadium on Day 7 of the Rio 2016 Olympic Games on August 12, 2016 in Brasilia, Brazil. Sweden won 1-1 (4-3 PSO) against the United States. (Photo by Celso Junior/Getty Images)

One year after winning the World Cup, the United States women’s soccer team has suffered a shocking upset.

After three consecutive gold medals, the American women fell to Sweden in a penalty shootout in the Olympic quarterfinals on Friday.

The US women’s team, currently led by Jill Ellis, captured the gold medal in 2004, 2008 and 2012, with the last two coming with Pia Sundhage as the American coach. However, Sundhage went home to coach Sweden after the London 2012 victory, and in Brasilia on Friday, an American team that included more than six of her former players found itself denied the opportunity to earn a fourth straight Olympic title.

Sweden gained a 1-0 lead in the 61st minute after a solid passing sequence led to a breakaway for Stina Blackstenius, whose hard, low shot beat Hope Solo and fell into the right corner of the net.

Sixteen minutes later, the U.S. responded, with a tad bit of luck. A pass from Tobin Heath bounced off the face of a Swedish defender and landed right at the feet of Alex Morgan, who fired a left-footed shot to tie it up 1-1.

In the final part of regulation, the Americans dominated, as they had much of the game, and nearly scored again on an effort from captain Carli Lloyd, but ultimately couldn’t finish.

Then came a 30-minute overtime. Lloyd scored again on a header, but was quickly ruled offside in what some judged to be a questionable call. Moments later, Sweden’s Lotta Schelin had her own goal disallowed, also due to an offside call.

Neither team came close again, which meant the game would be decided via a penalty shootout. Solo was forced to deal with one more shootout in a tournament during which she had been continuously jeered by local fans for Twitter photos and comments she posted implying concern over the Zika virus. And she did her best.

Morgan had the first shot blocked by Swedish goalkeeper Hedvig Lindahl. However, on the Swedes’ third shot, Solo kept her team even by guessing right on Linda Sembrant’s shot and hitting the ball away.

Solo guessed right again on the following shot, diving to her left and nearly knocking away a shot by Caroline Seger. But the ball went in and after four rounds of the shootout it was still tied, 3-3.

Christen Press took the fifth shot for the U.S. and fired it straight over the top of the goal. That meant the pressure was on for Solo to block one last shot, or let it hope it was missed by Sweden somehow. She stalled, attempting to ice the Swedish shooter, but Lisa Dahlkvist sank the ball into the back of the net to secure the crucial victory for the Scandinavians.

The loss was the earliest exit from a World Cup or Olympics for the Americans since the international tournaments began in 1991 and 1996, respectively. The U.S. has finished at least third in every World Cup and won every gold medal game in the Olympics prior to this year, winning four golds and one silver.

BRASILIA, BRAZIL – AUGUST 12: Alex Morgan #13 of United States controls the ball against Nilla Fischer #5 of Sweden during the Women’s Football Quarterfinal match at Mane Garrincha Stadium on Day 7 of the Rio 2016 Olympic Games on August 12, 2016 in Brasilia, Brazil. Sweden won 1-1 (4-3 PSO) against the United States. (Photo by Celso Junior/Getty Images)

Italy Beats Sweden For Bid To Host 2026 Winter Olympics, Games To Be Held In Milan-Cortina