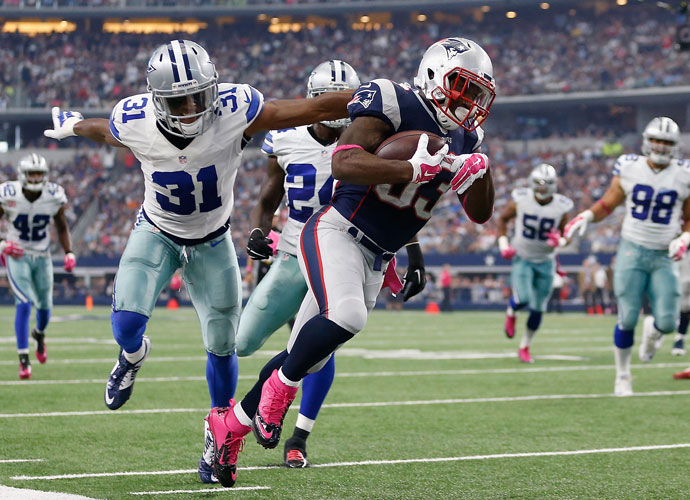 ARLINGTON, TX - OCTOBER 11: Running back Dion Lewis #33 of the New England Patriots carries the ball as cornerback Byron Jones #31 of the Dallas Cowboys tries to make the tackle during the first half of the NFL game at AT&T Stadium on October 11, 2015 in Arlington, Texas. (Photo by Christian Petersen/Getty Images)

Hitting a speed bump is typical for any NFL team in the midst of a taxing season, but the New England Patriots slammed into a divider in a perplexing 34-10 loss against the Tennessee Titans on Sunday.

“That’s what happens when you go cheap. You get your a— kicked.” These are the words of running back Dion Lewis, who assisted in a Titan win over the team he won a Super Bowl with, having no shortages of words for his former team. “It’s a real sweet win, you know, especially when you used to be there and they didn’t want to bring you back,” Lewis said.

After hearing of Lewis’ comments about the Patriots’ penny, quarterback Tom Brady proverbially shrugged in response. “It’s an emotional thing. I think people have different emotional feelings,” he said. “Dion had a great career here. It’s hard to see great players go and I know it’s not the first time it’s happened, it has happened to a lot of guys. I am sure when they go to different places they want to beat us, absolutely. I can understand that emotion. We’ve had guys come from other teams and they have wanted to beat that team. It’s just part of the sport.”

During the drubbing of the juggernaut Patriots, Lewis was spotted mouthing off with several of his former teammates. Lewis wasn’t the only one involved with spats of back-and-forths, as there was a palpable sense of contention on the field and along both sidelines. This even manifested itself through some of the play-calling: On a third-and-7 with 11:41 left in the game, coordinator Josh McDaniels called a reverse pass play to Brady, who caught it for a gain of six yards after tumbling into the turf.

Tom Brady out here looking like your uncle on Thanksgiving who peaked in high school. pic.twitter.com/JIWYLOCfk6

On the succeeding possession, the Titans looked to up the ante, dialing up the same exact play. Titans receiver Darius Jennings lobbed a pass to quarterback Marcus Mariota, who caught it for 21 yards and the first down, converting what the Pats failed to do just before.

Titans Head Coach Mark Vrabel, another former Patriot, played with Brady from 2001-2008. His decision to replicate the play call wasn’t necessarily in the spirit of vengeance, though. On the play-calling decision, Vrabel said: “I wanted to see if it looked any better than theirs.”

With consideration to another former Patriot in cornerback Malcolm Butler, it’s beginning to smell a little bit like payback. Butler insisted that the game was just like any other win, and dismissed the idea of reprisal. When a reporter asked him if he would smile wider when assessing the win against his former team, however, Butler added that he “most definitely” would be.