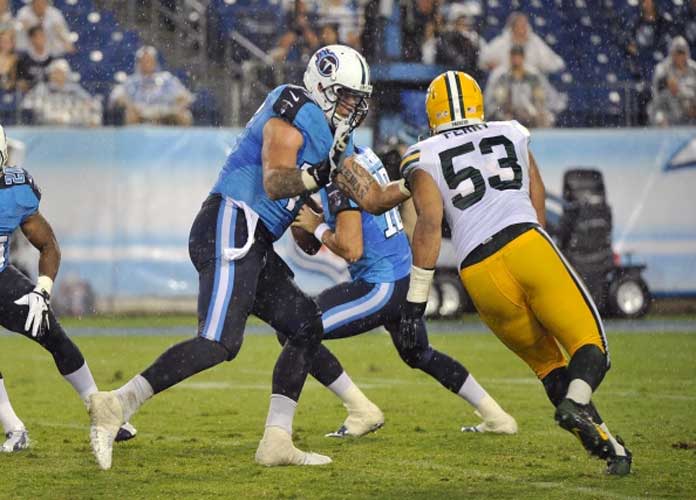 Tennessee Titans offensive tackle Taylor Lewan was ejected from Sunday’s 47-25 victory against the Green Bay Packers for making contact with an official.

Lewan appeared to push the arm of back judge Steve Freeman’s arm during a first-quarter confrontation with Packers defensive tackle Letroy Guion, who was called for a late hit on Titans quarterback Marcus Mariota.

After the play, Lewan got in Guion’s face and shoved him. When Freeman attempted to intervene, Lewan pushed him out of the way and was immediately tossed from the game.

Lewan’s ejection was the 11th of the season thus far, according to ESPN.

Dennis Kelly replaced Lewan at left tackle in the Titans’ lineup. Kelly was acquired in the Dorial Green-Beckham trade.

Guion was called for encroachment, which was declined, and unnecessary roughness, which was accepted. However, it was offset with Lewan’s 15-yard penalty.

When asked about the incident by reporters in the locker room post-game, Lewan showed remorse for his actions, but added: “I will never let someone take a free shot on Marcus Mariota.”

Taylor Lewan on his ejection in the locker room #Titans pic.twitter.com/szDFA7InWj

His ejection, nevertheless, didn’t slow down Tennessee, who took a 14-0 lead shortly afterwards and eventually a 21-0 lead on route to the win.

After the game, Titans coach Mike Mularkey stated he agreed with the decision to eject Lewan.

“It was the right call,” Mularkey said. “Taylor should not have been where he was. He should have been back in the huddle — no excuses. He shouldn’t have been there.”

The Titans (5-5) will next visit the Indianapolis Colts on Sunday, while the Packers (4-5) will visit the Washington Redskins that day.