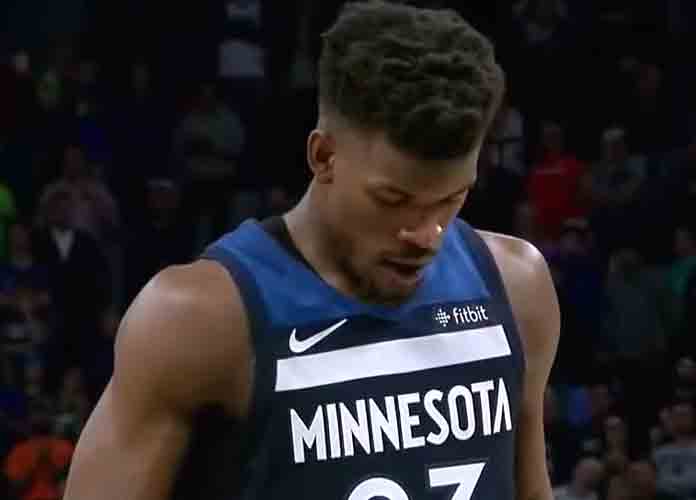 Timberwolves' Jimmy Butler lashes out at teammates, staff at practice

Karl-Anthony Towns is walking into the locker room. He was Minnesota’s No. 1 overall pick in 2015 and the young superstar’s upset.

Why nobody wants to trade for Jimmy Butler

It’s in a game the Wolves would lose 102-120 to the Houston Rockets. He slams the wall. Someone with the Wolves yells out “KAT come on,quit being a f—ing p—y!”

That was Jimmy Butler, during the same game where he’d injure a meniscus that required surgery. Today, he’s yet to be traded. All signs point to a four-team deal by the end of this week.

After coach Tom Thibodeau’s efforts to convince him to rejoin the team failed, other teams started inquiring about Butler. Concerns that Thibodeau wasn’t hearing trade offers developed and Minnesota owner Glen Taylor told other owners to contact him directly. Butler even
spoke to him for reassurances trade talks were proceeding in good faith.

Wolves ownership learned that Miami is Butler’s preferred trade destination. They were at one point making a push for him but Thibodeau seems to have torpedoed the trade talks. Management even signed Towns to a five-year, super-max contract worth $190 million. Towns told the Wolves earlier this month he couldn’t “coexist” with Butler.

We know what’s going to happen with Butler. But the better question to ask might be why would any team trade for Butler? While on paper, Butler’s a very motivated All-Star, off it, he’s an oft-injured head case. Butler is like Carmelo Anthony, another ball-hogging wing who caused issues with any team he was on. Like Anthony eight years ago, Butler is forcing his way off a team to one he could easily sign with in ten months. He’s costing the team assets. Odds are they’ll also take on the $48 million contract of Gorgui Dieng. Then, they’ll have to resign him to a new contract most likely in the range of five years, $155 million.

Deals like that for 30-year-old players rarely help teams.

This season, Butler went after Towns for not practicing hard enough. Butler’s only ever played over 70 games twice in his career. Towns has never missed a game. Considering the track record of Thibodeau players, Butler’s likely to fall apart soon. He missed over a month with that meniscus injury last season that required surgery. He’s played for Tom Thibodeau for most of his career. The coach, famous for grinding players to the bone, reunited with Butler last season in Minnesota after five years together in Chicago.

Zach La Vine blew out his knee after two seasons with Thibodeau and had to sit out an entire year. Luol Deng embraced Thib’s workload. He averaged at least 38.7 minutes for each of his first three seasons, then had a series of nagging injuries before aging overnight. For the last five seasons, he’s been the shell of the All-Star player he once was.

Joakim Noah was a two-time All-Star and won Defensive Player of the Year. Then the Thib’s minutes caught up to him and he missed 53 games in his last season with the Bulls. He signed a four-year, $72 million deal with the Knicks and has played in only 52 games. After two seasons, the Knicks are trying to waive him.

Everyone knows what happened to Derrick Rose. He was the youngest MVP, blew out his knee, missed a whole season, tore the ligaments in his other knee, and has never been the same since. He’s bounced around the league since his contract with the Bulls expired.

How many times does Tom Thibodeau have to give an update on an MRI of a star player’s non-contact knee injury before he’s out of the league?

Jimmy Butler is 29, his next contract will go until he’s 35. It’s rare a Thibodeau player makes it past 30 healthy, especially one who’s bought into Thib’s ideology like Butler. Aside from injury concerns, Butler has complained publicly about teammates and coaches every year since 2015. After Game 5 of their playoff series versus Houston, Butler refused to fly home with the team.

Today’s NBA relies on chemistry. No one on the Warriors holds the ball. The Celtics didn’t have a player average over 32.2 minutes. A team with two ball-stopping wings, former Rookie of the Year Andrew Wiggins and Butler, won’t survive. Butler’s knees certainly won’t after Thibodeau’s minutes.

Hero ball is long gone. Kobe retired two years ago. Allen Iverson last played in Turkey in 2011. The best thing the Wolves could do is to fire Thibodeau, trade Butler, let Towns develop, and get Wiggins involved again.