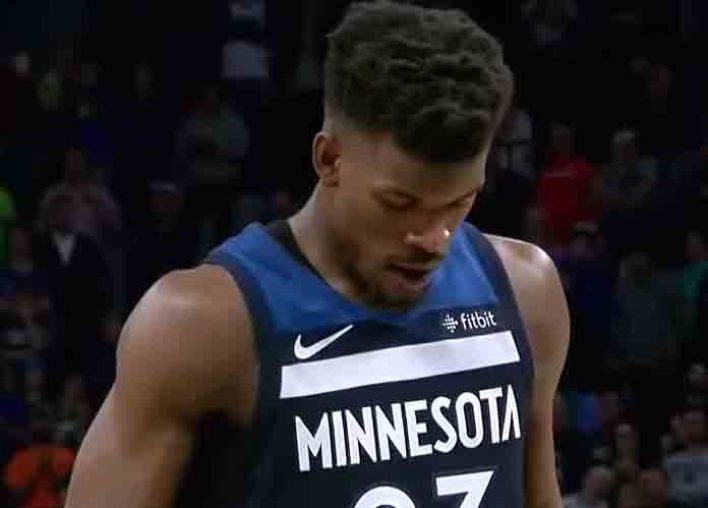 Timberwolves' Jimmy Butler lashes out at teammates, staff at practice

In his first practice back with the Minnesota Timberwolves, trade-hungry shooting guard Jimmy Butler fought to prove his worth, this time against his own
teammates.

Jimmy Butler Turns Up The anger In Practice

An Adrian Wojnarowski report detailed a feisty, determined Butler that took charge of the Wolves’ practice and audibly denounced a few of his teammates and team brass. Among those was General Manager Scott Layden, who was on the receiving end of a brash call-out from Butler.

“You f-—ing need me, Scott,” Butler shouted during a boisterous practice. “You can’t win without me.”

Making sure to back up his big talk, Butler bombarded the Wolves’ starting lineup with buckets and by taking a few scrimmages wins in dominant fashion. The most exhilarating detail: Butler’s wins reportedly came with a team of low-end bench players, and the final game of the practice concluded with Butler exiting with an aura of swagger and confidence.

Leaving the team and staff “largely speechless,” the players appeared energized and impressed by Butler’s showing. He spoke to Rachel Nichols of ESPN about his emotions and the now infamous practice session.

“A lot of it is true,” said Butler on his words. “I haven’t played basketball in so long. I’m so passionate. I don’t do it for any reason but to compete. All my emotion came out in one time. Was it the right way? No! But I can’t control that when I’m out there competing. That’s raw me, me at my finest, me at my purest. Inside the lines.”

He was also reportedly critical of forward Karl-Anthony Towns during the practice, guarding him in the post and forcing a pass out of the paint. “He can’t do sh—t against me!” Butler expanded more on his outbursts, citing passion as his reasoning for the clamor.