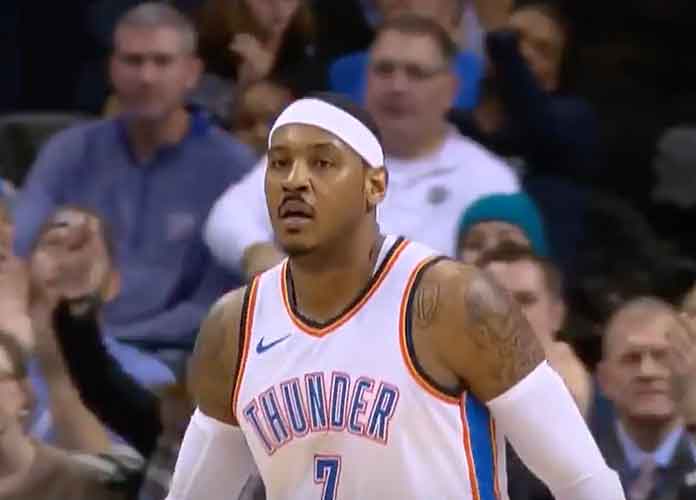 The Oklahoma City Thunder sent Carmelo Anthony to the Atlanta Hawks on Thursday as part of a reported three-team deal with the Philadelphia 76ers, but the veteran small forward may soon be waived and join the team of his choice.

According to ESPN’s Adrian Wojnarowski, 34-year-old Anthony will be bought out for his full $27.9 million, but will then enter the free agency market and could join any team he wishes. Wojnarowski reported the Houston Rockets are the top squad Anthony is interested in playing for next.

Anthony will get his entire $27.9M in the buyout and waiver with Hawks. It could take a few days to work thru logistics on trade. ‘Melo met with Rockets and Heat in Las Vegas. Again, Rockets are the frontrunner. https://t.co/2rbDZ7vUu1

NBA fans quickly jumped on Twitter to comment on the trade for Anthony, who lasted just one season with the Thunder after playing six years with the New York Knicks. Oklahoma City were eliminated by the Utah Jazz in the first round of this year’s playoffs. and Anthony was reportedly very unhappy all throughout this period.

As part of Thursday’s trade, the Hawks also received Justin Anderson and a 2022 Thunder first-round draft pick. Oklahoma City got Timothe Luwawu Cabarrot and Dennis Schroder, while Mike Muscala ended up with the Sixers.

Fans seemed to either poke fun at Anthony for his brief time with the Thunder and Hawks, or note how the forward being traded, waived and sent to another team seemed far too complex or simply not a very financially savvy move. Others questioned whether the Rockets would be the best fit for Anthony.

There’s a LOT to this Carmelo Anthony trade pic.twitter.com/hQL1Fa4oZo

With the Hawks waiving Carmelo Anthony, it’ll be interesting to see where he lands. I know the Rockets are the front-runner to add him, but is he really a good fit there? If Houston’s offseason is losing Trevor Ariza/Luc Mbah a Moute and adding 34-year-old Carmelo, I’m not a fan.

NBA teams have paid Carmelo Anthony, Dwyane Wade and Dwight Howard $62.2 million to go away in the past calendar year

Carmelo reading that he’s getting traded and then waived. pic.twitter.com/ga3oxQTpdU

Hawks GM: We traded for you.

Hawks GM: But we’re going to waive you.

For his next trick, Melo will sign a veteran’s minimum contract in a luxurious city of his choice that probably includes a no-trade clause, 15 years of player options, and equity in the GM’s family business.