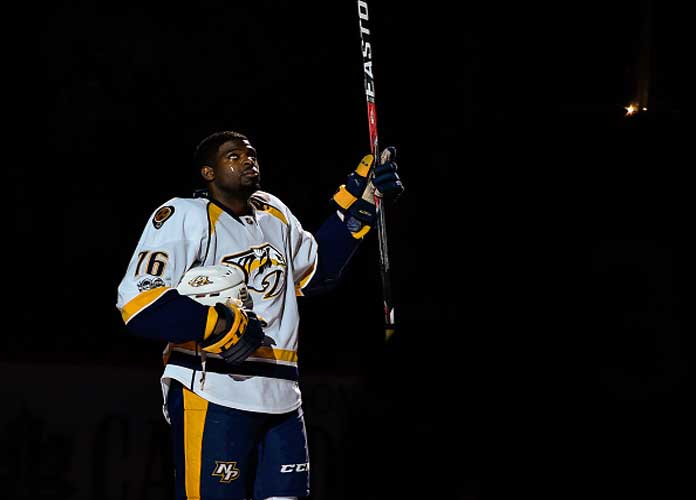 MONTREAL, QC - MARCH 02: P.K. Subban #76 of the Nashville Predators is teary eyed as the Montreal fans give him a standing ovation during the NHL game against the Montreal Canadiens at the Bell Centre on March 2, 2017 in Montreal, Quebec, Canada. (Photo by Minas Panagiotakis/Getty Images)

If everyone thought the fist fights in pro hockey were getting out of hand, wait till they get a bite of this.

The Predators were playing the Golden Knights on Wednesday when things started getting out of hand… and teeth too. With only 26 seconds left in the second period, tempers started flaring and P.K. Subban and Pierre-Edouard Bellemare got into it.

At the beginning of the fight you can see Subban and Bellemare fighting for position alongside the goal box. They get tangled up a bit and Subban punches Bellemare in the back of the head. Afterwards, you see Subban reach around Bellemare’s face mask and try to lift him up. However, immediately after trying that, Subban rips his hand away while grabbing his finger and yelling out ” He bit me”.

Subban had this to say following the incident: “All I tried to do was grab him.” He later continued and said, “I grabbed him by the head to pull him up and he bit me, so that’s it. I don’t know what to say.” Subban was seen with blood dripping down his jersey from this incident.

It was certainly an awkward situation for both parties. Bellemare claims he never bit Subban to began with. In fact, he pushed the notion that this was more Subban’s fault than anything. Bellemare later told reporters “He tried to pull me up, so obviously he’s feeling teeth and he’s acting on it. I don’t know what to tell you, really.”

Bellemare says it was mere coincidence that led to him biting Subban and that it’s not his fault.

“What do you want me to say?” Bellemare said. “Like, I have a half glove in my throat and playing with the back of it and pulling me up. There was no mouth guard when he pulls up. Those are my teeth.”

The referees weren’t sure if Bellemare bit him or not so no penalty was enforced on him. The last biting accident in the NHL cost Vancouver’s Antoine Roussel over $5,000.