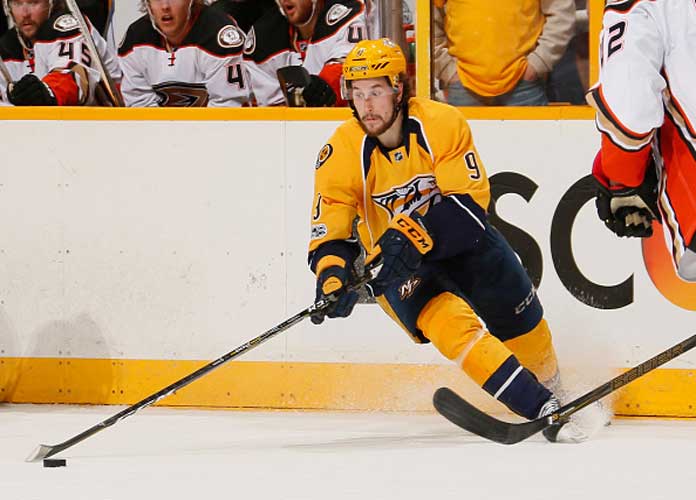 NASHVILLE, TN - MAY 16: Filip Forsberg #9 of the Nashville Predators skates during the third period in Game Three of the Western Conference Final against the Anaheim Ducks during the 2017 Stanley Cup Playoffs at Bridgestone Arena on May 16, 2017 in Nashville, Tennessee. (Photo by Frederick Breedon/Getty Images)

The Nashville Predators defeated the Colorado Avalanche 5-2 in the Game 1 of the first-round playoff series between the two teams on Thursday.

Filip Forsberg scored the tie-breaking goal at the beginning of the third period to make it 3-2 at Bridgestone Arena. The winger had another goal with 7:50 left in the final period, and Colton Sissons’ empty-netter with less than 2 minutes remaining sealed the win for Nashville.

The Predators lost to the Pittsburgh Penguins in six games (4-2) in the 2017 Stanley Cup Finals, and Thursday’s large Nashville crowd was so loud it likely has high expectations to see the team return to the Finals this year. The Avs are back in the playoffs for the first time in four years.

“We’re all here to play for the Cup. … It’s going to be real tough,” Forsberg told USA Today. “Colorado’s been really good all year, and they played a good game tonight, too. Game 1 is ours, but (we’ll) keep working hard.”

Forsberg gave his team a two-goal lead (4-2) after he skated past rookie defenseman Sam Girard — who began this season with Nashville — and taking an amazing shot at the net.

Toward the beginning of the middle period, Nashville tied it 1-1 just moments after Matt Irwin stopped the Avs from taking a 2-0 lead by making a stellar goal-line save behind goalkeeper Pekka Rinne. Irwin batted the puck out of the crease and the Predators raced all the way down the other end of the ice. Austin Watson then scored with a shot that flew above goalie Jonathan Bernier’s shoulder.

Colorado made it 2-1 less than two minutes later when Carl Soderberg’s wrist-shot was deflected by Blake Comeau and the puck flew past Rinne.

Defenseman Nikita Zadorov opened the scoring for the Avs 6:36 into the night.

“I thought we did some really good things in the first two periods. In the third we gave up some odd-man rushes and got away from our game a little bit,” Comeau told The Denver Post. “There’s a couple things we need to clean up and I’m sure we’ll do that tomorrow and get ready for Game 2.”

Game 2 will be played Saturday at 3pm EST (2pm CST) in Nashville. NBC will air the matchup.