NHL To Stage Preseason Games In China Between Kings, Canucks In September Ahead Of 2022 Winter Olympics - uSports.org 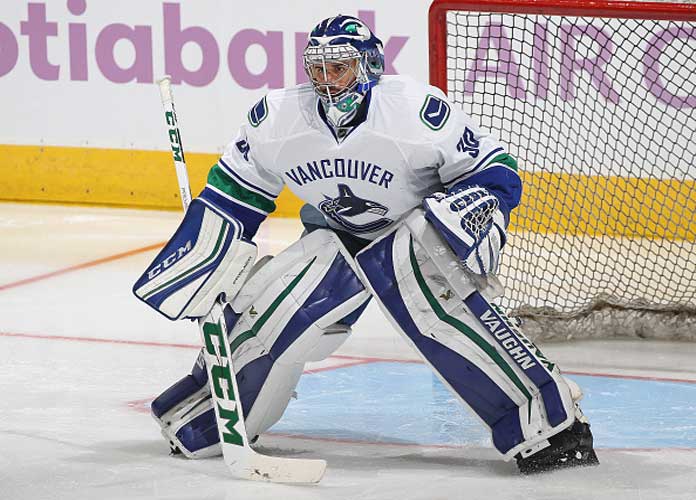 TORONTO, ON - NOVEMBER 5: Ryan Miller #30 of the Vancouver Canucks warms up prior to playing against the Toronto Maple Leafs in an NHL game at the Air Canada Centre on November 5, 2016 in Toronto, Ontario, Canada. The Leafs defeated the Canucks 6-3. (Photo by Claus Andersen/Getty Images)

NHL To Stage Preseason Games In China Between Kings, Canucks In September Ahead Of 2022 Winter Olympics

The National Hockey League will stage two exhibition games in China this September as it looks to gain interest in the nation that will host the 2022 Winter Olympics.

The NHL’s Commissioner, Gary Bettman, announced the decision in a press conference Thursday morning at Le Sports Center in Beijing. Both preseason games will feature the Los Angeles Kings against the Vancouver Canucks, and will be held in Shanghai on Sept. 21 and in Beijing — currently the top candidate city for hosting the 2022 Winter Games— on Sept. 23. Bettman called this a historic moment for the league.

This is just one of the NHL’s several initiatives to host games in foreign countries with the hopes of tapping into fandom in sports markets around the world. Next season, the Colorado Avalanche and the Ottawa Senators will play two regular-season games in Sweden. Other sports leagues, including European soccer leagues and the National Basketball Association (NBA) — the latter of which is very popular in China — are also attempting to build interest in sports in the Asian nation, where these types of major sports have not received much viewership in recent years.

Since China is one of the largest countries in the world with a population of more than 1.3 billion, the NHL strongly believes much can be gained from this market.

Nevertheless, it remains in doubt whether the NHL’s players will participate in the 2018 Winter Olympics in Pyeongchang, South Korea.

NHL team owners have expressed discontent with having to shut down the season for two-and-a-half weeks and exposing their best players to injury during the Winter Games.

Last week, Bettman said people should assume the league would not send its players to South Korea.

Nevertheless, the International Ice Hockey Federation (IIHF) has agreed to cover the cost of travel and insurance for NHL players, Reuters reported Wednesday, in hopes of ending the gridlock.

The cost, which could amount to up to $20 million, was covered at the last five games by the International Olympic Committee (IOC), which has stated it would no longer do this next year.

Bettman seemed unmoved by the offer.

“The expenses that they say are being paid are consistent with the prior Olympics – that is not the issue we are dealing with,” he told a media briefing at an arena in the Chinese capital. “We are focused on the disruption of the season.”

The commissioner added the NHL was committed to expanding the sport in China regardless of whether its players participated in the 2018 Olympics.

“We first have to deal with South Korea before we can focus on Beijing,” Bettman said. “But the point is, whether or not the players play for two weeks in either South Korea or Beijing does not change our commitment for the long term to grow hockey in China.”

TORONTO, ON – NOVEMBER 5: Ryan Miller #30 of the Vancouver Canucks warms up prior to playing against the Toronto Maple Leafs in an NHL game at the Air Canada Centre on November 5, 2016 in Toronto, Ontario, Canada. The Leafs defeated the Canucks 6-3. (Photo by Claus Andersen/Getty Images)