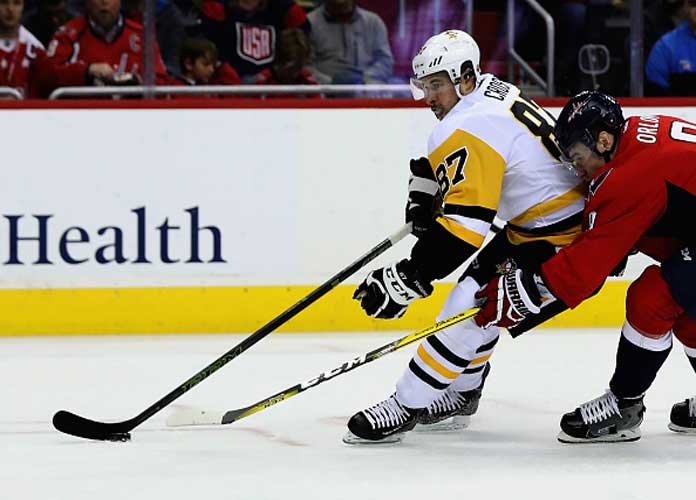 WASHINGTON, DC - JANUARY 11: Sidney Crosby #87 of the Pittsburgh Penguins moves the puck in front of Dmitry Orlov #9 of the Washington Capitals in the first period at Verizon Center on January 11, 2017 in Washington, DC. (Photo by Rob Carr/Getty Images)

The Capitals (14-7-3, 2nd in Metropolitan Division) are on one of the hottest streaks in the league right now as they enter tonight’s matchup with six back-to-back victories and look primed to stretch it to seven. The Devils are a whole other story, as they are coming off a three-game losing streak (two of which came on the road).

The Devils are tied points-wise with the Philadelphia Flyers for last in the Metropolitan division and will need to figure things out quickly before the season gets away from them.

Center Jean-Sebastien Dea was claimed by the Pittsburgh Penguins after the Devils put him on waivers yesterday. Dea ends his stint with the Devils with 3 goals, 2 assists and 27 shots in 20 games played.

The Devils also announced that Michael McLeod has been called up to New Jersey. McLeod has put up 10 points (3 goals, 7 assists) in 21 games for the minor league Binghamton Devils thus far.

Most concerning of McLeod’s numbers are his shots, which he’s only amassed 25 of over his 21 games (1.2 per game). For reference, Dea had a shot rate of 1.35 in the NHL before being waived. Assuming he gets the start, this could be the 2016 first-rounder’s NHL debut.

JS Dea has been claimed off waivers by Pittsburgh.

New Jersey has recalled F Michael McLeod from Binghamton (AHL). He joins the team for the trip to Washington DC. pic.twitter.com/Qh3PJQKYhL

New Jersey right wing Joey Anderson will sit out for tonights game as he recovers from surgery for a broken left ankle that he sustained last week against the Montréal Canadiens. Anderson has appeared in 11 games so far this season with a goal, an assist and 17 shots on goal.

Washington has been plagued with injuries for the past two weeks after both centerman Evgeny Kuznetsov and forward T.J. Oshie went down with concussions in the same game on Nov. 14. Oshie is second highest scorer on the team with nine goals and 14 points.

Star left wing Alex Ovechkin is leading the helm in the nation’s capital with 18 goals and 28 points in 24 games. He’s scored in three games in a row and has six goals in his last six games.

Centerman Nicklas Backstrom and defenseman John Carlson have also been dominating offensively, feeding the team 22 and 21 assists, respectively, and 28 points.

Jakub Vrana seems to have taken a step forward, with 14 points in 24 games, including six goals. The other defensemen that will be seen a lot are Matt Niskanen, Dmitry Orlov and Michal Kempny, with each averaging at least 18 minutes a game.

Tom Wilson had a heck of a performance in the Caps’ 4-1 assault against the New York Islanders Monday night. Wilson left the game with 2 goals, 6 shots on goal, 3 points and 1 assists. He has 12 points and 6 goals in 8 games.

Big goal. Big hit. Is there anything Tom Wilson can’t do? pic.twitter.com/LXY6068fWQ

This game airs on NSW+, MSG+ and NHL Network at 7:00 p.m. EST Friday from Capital One Arena.