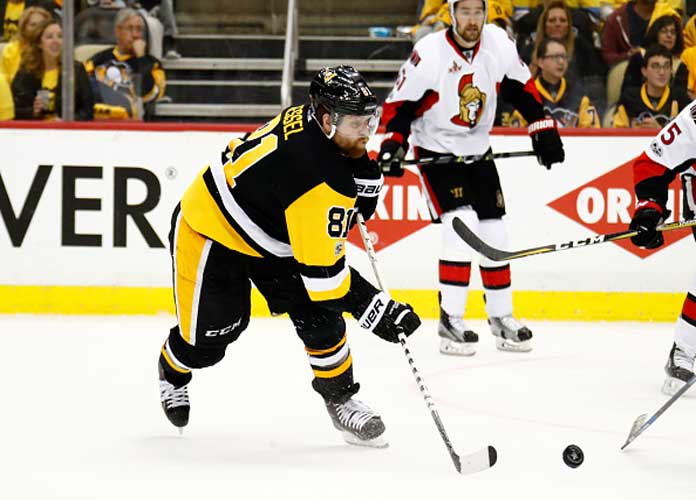 PITTSBURGH, PA - MAY 15: Phil Kessel #81 of the Pittsburgh Penguins shoots the puck against the Ottawa Senators during the third period in Game Two of the Eastern Conference Final during the 2017 NHL Stanley Cup Playoffs at PPG PAINTS Arena on May 15, 2017 in Pittsburgh, Pennsylvania. (Photo by Gregory Shamus/Getty Images)

The Pittsburgh Penguins (10-8-5; 25 points, 6th in Metropolitan Division) will head to the Rockies Wednesday night to take on the Colorado Avalanche (14-6-4, 32 points, 2nd in the Central Division).

Colorado enters Wednesday night’s game on a five-game winning streak and have gone 7-0-1 in their last eight games.

This year the Avs have been a well-oiled scoring machine and are currently in the lead for most goals scored at 89. The Avs are averaging 3.7 goals per game and are scoring on 32.1 percent of their power play opportunities.

On Tuesday night, the Avs played in Nashville, beating the Predators (17-7-1, 1st in the Central Division) 3-2. Colorado has produced 34 goals during its point streak and got the winning goal from 20-year-old forward Tyson Jost in the third period.

No one in the league has more than 33 points so far this season except for Mikko Rantanen and Nathan MacKinnon.

Rantanen scored his 40th point of the season against the Preds, while MacKinnon scored his 37th. Rantanen and MacKinnon have both put up 11 points in the current five-game winning streak and have scored a steady 2 points in each of the last four games.

The best line in hockey pic.twitter.com/54Ocw38nse

After finishing up the back-to-back mini-Western swing tonight, the Penguins will head to the Pepsi Center to take on the Avs.

The Penguins will look for another victory after winning three of their last four games. The Pens are averaging 3.4 goals per game and are scoring on 24.6 percent of their power play opportunities. Jake Guentzel leads Pittsburgh with 11 goals, Evgeni Malkin has 21 assists and Phil Kessel has 67 shots on goal.

Defensively, the Pittsburgh Penguins are allowing 3.1 goals per game and are killing 82.4 percent of their opponents’ power plays. Casey DeSmith has allowed 27 goals on 370 shots. The Penguins have allowed three or fewer goals in their last four games.

The Penguins have recorded 18 goals during their point streak and will need another big effort against the Avalanche, who lead the league in goals per game (3.71) while their power play is sizzling at 12-of-24 during its point run.

On Tuesday night, Pittsburgh beat the Winnipeg Jets (13-8-2) 4-3. Kessel notched an assist Tuesday to extend his point streak to nine games and the right wing moved within two of Malkin (30 points) for the top spot on the team.

This pass by Letang is the reason Aston-Reese scores that goal. Look at this thing. Absolutely unreal. Letang is feeling it right now. pic.twitter.com/J13P2Fn0eg

Captain Sidney Crosby scored Tuesday for his tenth of the season, and the center has recorded 11 of his 25 points in the last seven contests (four goals), while defenseman Kris Letang notched his sixth assist in a four-game span. Goalie DeSmith has turned aside 79 of the 85 shots he faced in three straight wins with Matt Murray (lower body) out.

The Avalanche won both meetings last season against the Penguins, including a 4-2 victory on home ice.

This game will air nationally on NBC Sports and locally in Pittsburgh on AT&T Sportsnet at 9:05 p.m. EST.