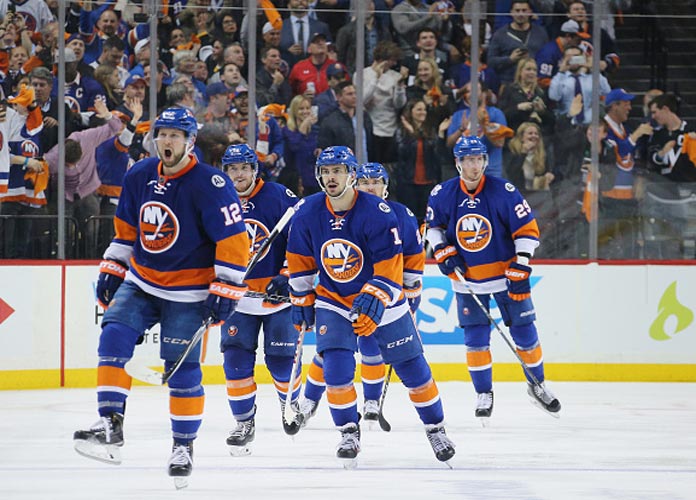 NEW YORK, NY - MAY 03: Josh Bailey #12 of the New York Islanders (l) celebrates his second goal of the game against the Tampa Bay Lightning at 2:27 of the third period on the powerplay in Game Three of the Eastern Conference Second Round during the 2016 NHL Stanley Cup Playoffs at the Barclays Center on May 03, 2016 in the Brooklyn borough of New York City. (Photo by Bruce Bennett/Getty Images)

After two years of dozens of complains and low games attendance, Brooklyn’s Barclays Center has decided it’s no longer worth it to host the New York Islanders.

According to two sources, the arena wants the NHL team out following the 2018-19 season because it believes it could earn more revenue from concerts and other events.

Russian billionaire Mikhail Prokhorov, who owns the building and the Brooklyn Nets, has,  since November, been seeking an investor to take a stake in both.

Barclays Center didn’t specifically address the future of the Islanders. Tim Leiweke, co-founder of Oak View Group, which has been advising the team in negotiations with the arena, declined to comment, as did a spokesman for Islanders owners Jonathan Ledecky and Scott Malkin.

The team’s stay in Brooklyn has proven unrewarding from the beginning. Average attendance has plummeted to 12,828, third-worst in the NHL. Plus, fans have complained of poor sight lines, while players say the ice is sub-par.

In addition, the Barclays-Islanders agreement is unconventional, in that the arena pays the team an average of $53.5 million a year in exchange for control of business operations, which includes revenue from ticket and suite sales.

The lease can be terminated by either the Islanders or arena management. If the team cancels, it can leave after next season. If not, then the Islanders’ tenure at Barclays Center would end after 2018-2019. Either way, the team will need to find a new arena to play.

In July, Bloomberg News reported that Ledecky and Martin were contemplating building a new arena next to Citi Field in Queens.

Prokhorov now owns the team’s former home, the Nassau Coliseum, although the owners paid a large premium for the Islanders in 2014 based on the pending move to New York City. They have demonstrated no explicit interest in returning to Long Island.

The Coliseum is scheduled to reopen in April after a $130 million renovation, it’s projected to have about 13,000 seats for hockey, making it too small to permanently house an NHL team.

Per sources, Ledecky and Malkin also considered Belmont Park in Elmont as a potential venue. New York Governor Andrew Cuomo favors Belmont, a source close to the situation stated, which is why the state in recent months rejected all proposals for the undeveloped site, including from those hoping to build retail stores.

The Islanders last defeated the Montreal Canadiens 3-1 on Thursday. They next host the Washington Capitals on Tuesday.

NEW YORK, NY – MAY 03: Josh Bailey #12 of the New York Islanders (l) celebrates his second goal of the game against the Tampa Bay Lightning at 2:27 of the third period on the powerplay in Game Three of the Eastern Conference Second Round during the 2016 NHL Stanley Cup Playoffs at the Barclays Center on May 03, 2016 in the Brooklyn borough of New York City. (Photo by Bruce Bennett/Getty Images)