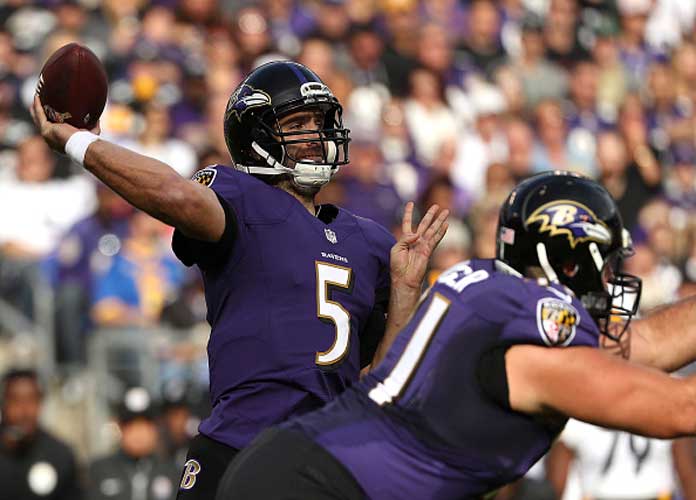 Week 4 of the NFL season has arrived. There are 14 big NFL games set for this Sunday, and here is what you need to know.

Cincinnati Bengals (2-1) coach Marvin Lewis said A.J. Green was fine after missing the second half of Sunday’s loss to the Panthers with a hip issue. If healthy, Green should be able to attack a banged-up Atlanta Falcons (1-2) defense that has lost three of their starting defensive 11. Atlanta will get a boost with the return of DE Takk McKinley.

The Miami Dolphins (3-0) are on fire but it’s important to note that their last win at Foxborough came a decade ago on Sept. 21, 2008. The Dolphins rank first in the NFL in average drive start (31.7-yard line) on kickoffs and are tied for second in the NFL with a plus-4 turnover differential. They look to have quite a healthy team with only four players on the injury report. The New England Patriots (1-2) could take advantage of a Miami defense that will be without key defenders William Hayes and Andre Branch and likely Chase Allen. New England’s injury report lists 11 players who were limited in practice for a variety of reasons, including Marcus Cannon, Rob Gronkowski, and Josh Gordon. Gordon was inactive last week against the Lions and is still dealing with a hamstring injury.

Through three weeks the Philadelphia Eagles (2-1) are averaging just 341 yards of total offense and 19.7 points per game this season while allowing the fewest rushing yards per game in the league with 61.7 yards per game against on the ground. Carson Wentz showed plenty of encouraging signs in his return to the field last week. Tennessee Titans (2-1) quarterback Marcus Mariota could take advantage of an Eagles secondary that is without safety Rodney McLeod. Mariota wasn’t healthy enough to start last Sunday but was able to relieve an injured Blaine Gabbert and post the team’s best QBR (62.2) of the season to secure a victory over the Jags.

This is a must win for the Houston Texans (0-3) and Indianapolis Colts (1-2) whose playoff hopes already dwindling. In their last 12 matchups, the Indianapolis Colts (1-2) have lost just four of those games. They are also 4-2 at home against the Texans in the last six games. The Texans come into this game having scored just 19 first-half points through its first three games – fifth-fewest in the league. Deshaun Watson has thrown three interceptions in opposing territory, second-most to Case Keenum for the league lead. Star receiver DeAndre Hopkins has gone five consecutive games without a first-quarter reception. The Colts have morphed into a defensive team the past two weeks with Andrew Luck struggling to drive the ball. Luck is struggling with the deep ball and his 5.34 yards per pass attempts ranks second last among qualifying starting quarterbacks.

The Detriot Lions (1-2) have the No.1 pass defense (152 yards per game)  and the worst-ranked run defense (149.3 yards per game) in the league. The Dallas Cowboys (1-2) could take advantage of this and lean on Ezekiel Elliott, who has gone three straight games without 20 carries, the longest stretch of his career. Matthew Stafford has found success spreading the ball around as the Lions are the only team in the league to have three players (Kenny Golladay, Golden Tate, and Theo Riddick) with 17 or more catches this year, and they’re the only team in the league that has had three players (Golladay, Tate, Marvin Jones) with at least 50 yards receiving in all three games. The Lions’ offensive line is coming off its best performance of the season, with the return of right guard T.J. Lang. Stafford has taken the fewest sacks of any quarterback with at least 50 pass attempts this year, but the Lions offensive line will have their hands against DeMarcus Lawrence.

New York Jets (1-2) have struggled to offensively are a set to play on the road against a Jacksonville Jaguars (2-1) team that has arguably the best defense in the league (fourth in yards allowed per game, second in points allowed per game). The Jaguars suffered their first loss 9-6 to the Tennessee Titans at home last Sunday and will look to bounce back this week at home. Blake Bortles couldn’t get anything going against the Titans, as he went 21 of 34 for 155 passing yards. The return of Leonard Fournette could boost the Jags ground game. Jets rookie quarterback Sam Darnold completed just 15 of 31 passes and had two interceptions. Running back Bilal Powell did most of the work on offense with 73 rushing yards and a pair of touchdowns on 16 carries.

The Buffalo Bills (1-2) shocked the NFL with their win over the Vikings 27-6 as 16-point underdogs, while the Green Bay Packers (1-1-1) looked pretty bad in their 31-17 loss against the Redskins. Josh Allen is completing 55.7 percent of his passes for 515 yards, two touchdowns, two interceptions and he’s also the leading rusher with 97 yards on 22 carries. The Bills are hopeful to get LeSean McCoy back this week who sat out the last game with a rib injury. Aaron Rodgers is still dealing with a lingering knee injury but has completed 66.4 percent of his passes for 832 yards, six touchdowns, and zero interceptions. It’s also important to note that in three games Rodgers has already been sacked 10 times. The Bills run defense has been strong, allowing only 80 yards per game while Green Bays run game is still struggling, with Jamaal Williams the leading rusher with 135 yards. Still, the Packers are the favorite at home.

The Chicago Bears (2-1) lead the all-time series with a 38-20 record. It will be difficult for the Tampa Bay Buccaneers (2-1) to post more than 30 points in this game as the Bears defense is allowing just more than 18 points a game and pressuring opposing quarterbacks on 30 percent of their dropbacks. Receivers Mike Evans and DeSean Jackson, along with TEs O.J. Howard and Cameron Brate, are destined to make some big plays if Bears CB Prince Amukamara (hamstring) isn’t on the field. This game will come down to the Bears’ devastating pass rush and Ryan Fitzpatrick’s prolific passing game.

The leading story going into this game is that it will be the first time that Cleveland Browns (1-1-1) quarterback Baker Mayfield starts. It should be an easy start for Mayfield as the Oakland Raiders (0-3) have the second-lowest pressure rate in the league. Though Derek Carr is completing nearly 80 percent of his passes the Raiders are giving up 27 points per game and are last in the league in sacks. The Raiders have looked good each week to start the game, but continue to falter in the second half, including a lack of pass rush, and the offense taking their foot off the gas. Amari Cooper has been struggling this season and has only hauled in three catches.

After three games the Arizona Cardinals (0-3) have the worst offense in the NFL and are set to face a Seattle Seahawks (2-1) defense that has the best interception rate in the NFL. The Cardinals haven’t beaten the Seahawks at home since 2012. Arizona’s offense has been a mess with only 20 points combined this year. The Cardinals will be looking for a new spark as rookie quarterback Josh Rosen will take the field Sunday. Seattle WR Tyler Lockett leads the team with 12 catches for 196 yards, three touchdowns and a strong 16.3 yards per catch average.

The New Orleans Saints (2-1) boast one of the most prolific offenses in the league ranking second in the NFL at 34.7 points per game but their defense ranks dead last with 34.3 points allowed per game. The New York Giants (1-2) will look to exploit this, and Eli Manning should have plenty of time to throw the ball downfield to Odell Beckham Jr., Sterling Shepard, and Cody Latimer. Drew Brees has been on fire and is playing at an MVP level. He’s thrown eight touchdowns and zero interceptions and more impressively, he’s completing 80.6 percent of his passes. The Giants will need to get physical with Brees’s number one receiving target Michael Thomas, who is leading the NFL in receptions (38) and receiving yards (398). The task of containing Thomas will be the job of Janoris Jenkins who is the Giants best cornerback.

Both the San Francisco 49ers (1-2) and the Los Angeles Chargers (1-2) team heads into the week at 1-2 and each is dealing with their share of bumps and bruises. The loss of starting quarterback Jimmy Garoppolo for the season with a torn ACL makes the 49ers a clear underdog coming into this matchup. Not only did the 49ers lose their starting QB in their Week 3 loss to the Kansas City Chiefs but they also lost CB Richard Sherman, who was one of their top players on defense.  It will now be up to QB C.J. Beathard to pick up where Garoppolo left off and try to lead the 49ers to a victory. Beathard appeared in seven games with five starts last season, completing 123 of 224 attempts (54.9 percent) for 1,430 yards, four touchdowns, and six interceptions. Philip Rivers gives the Chargers the edge as he’s been able to throw for 906 yards, eight touchdowns, and one interception. Rivers has a lot of weapons to throw too and if they find their rhythm the Chargers could provide a difficult matchup for a banged-up 49er secondary. The 49ers offense are currently second in the NFL in rushing at 152.7 yards per game, as Matt Breida goes neck and neck with Ezekiel Elliott of the Cowboys for the league lead in rushing yards (274). Breida has managed to do this despite splitting carries with Alfred Morris.

The Baltimore Ravens (2-1) have lost seven of their past eight regular-season games against the Pittsburgh Steelers (1-1-1) at Heinz Field. However, Baltimore is much-improved and averages 32.3 points per game heading into a matchup with one of the league’s worst pass defenses. Joe Flacco is the best thing going for the Ravens as he’s thrown for almost 900 yards and six touchdowns in the first three games. Flacco has developed a strong connection with WR John Brown who leads the Ravens with 136 yards and two touchdown grabs. Brown is also averaging the fifth-most yards per catch (19.4) among NFL wide receivers. Steelers QB Ben Roethlisberger tossed for 353 yards and three touchdowns in the Steelers’ 30-27 victory at the Tampa Bay Buccaneers on Monday Night Football which earned him the AFC Offensive Player of the Week. Antonio Brown has largely been held in check by opponents so far, averaging just 70 yards per game and 8.8 yards per catch and is overdue to break out. The Ravens were able to shut Brown down at home last season, but he exploded for 213 yards on 11 grabs back home at Heinz Field.

Kansas City (3-0) offense has averaged an amazing 39.3 points per game. Chiefs quarterback Patrick Mahomes has thrown 13 touchdowns in three games without a single interception. Mahomes has a plethora of weapons, from Kareem Hunt, Travis Kelce, Sammy Watkins, and Tyreek Hill. The Chiefs defense has been a totally different story as they rank last in most categories including total defense and have given up an average of 30.7 points – which is 30th in the league. The Denver Broncos (2-1) defense has been very good, but their secondary is banged up. Both Adam Jones and Tramaine Brock are expected back into the line-up this Sunday. In three games, QB Case Keenum has thrown three touchdowns, five interceptions, and the offense is ranked 19th in the league with an average of 20.3 points per game.