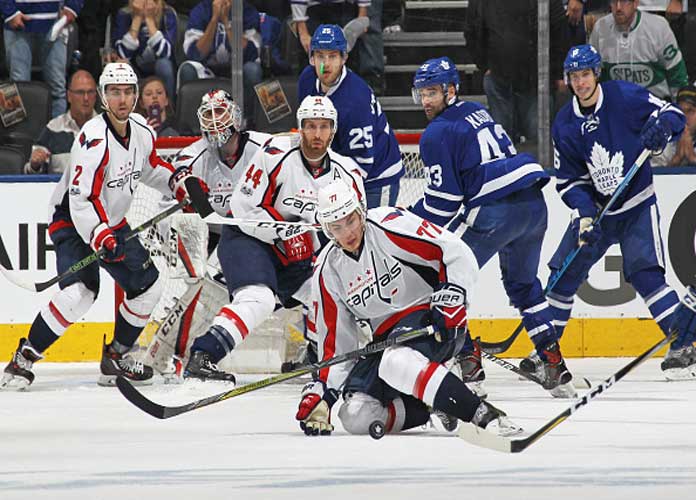 TORONTO, ON - APRIL 19: T.J. Oshie #77 of the Washington Capitals blocks a puck against the Toronto Maple Leafs in Game Four of the Eastern Conference Quarterfinals during the 2017 NHL Stanley Cup Playoffs at Air Canada Centre on April 19, 2017 in Toronto, Ontario, Canada. The Capitals defeated the Maple Leafs 5-4 to even series 2-2. (Photo by Claus Andersen/Getty Images)

Tom Wilson and T.J. Oshie both scored early in the first period to lift the Washington Capitals to a 5-4 Game 4 road victory over the Toronto Maple Leafs on Wednesday night.

With the win, the Capitals have tied the first-round Eastern Conference series 2-2 after losing the past two games to the Maple Leafs.

Game 5 of the best-of-seven series is Friday in Washington.

Wilson and Oshie had two goals each, Alexander Ovechkin also scored, and Braden Holtby made 29 saves for the Capitals, who were up 2-0 just 4:34 into the game.

“We had everyone going. We were putting pucks to the right areas” Oshie said. “We were shooting a little bit more, getting guys to the net, and I think that gave us some more chances. You’ve got to tip your hat because they kept coming at the end there, but we were able to hold them off.”

Oshie opened scoring for Washington at 2:58 of the first period for his first goal of the playoffs, and Ovechkin made it 2-0 1:36 later on a power-play goal that went in off the post. The Maple Leafs scored 42 seconds later when Jake Gardiner’s shot bounced off Zach Hyman’s skate at the top of the crease and slipped past Holtby’s left pad.

Toronto enjoyed a 5-on-3 advantage for the first 1:53 of the third period, when it trailed 4-2, but was unable to score on the power-play despite taking five shots. Washington’s Lars Eller was called for delay of game, and then two seconds later Brooks Orpik was whistled for slashing.

Wilson then scored two goals in quick succession late in the first (at 13:41 and 16:04) to put the Capitals up 4-1. Moments after diving to swat away a puck that got past Holtby and dangerously close to the goal line, Wilson raced to the other end of the ice for a breakaway and fired a shot past goalie Frederik Andersen that deflected off a Toronto defenseman near the crease to give Washington a 3-1 lead.

Thus far, Wilson has three goals in the series after scoring seven in 82 regular-season games.

James van Riemsdyk scored on a power play at 5:39 of the second period to cut Washington’s lead to 4-2 with a shot that deflected into the net off Dmitry Orlov.

Dmitry Orlov does the Leafs a favour, deflecting James van Riemsdyk into the back of the net. 4-2. pic.twitter.com/nEzBQVxVlD

Oshie scored at 8:11 of the third period, but his goal was waved off after officials called Nicklas Backstrom for interfering with Andersen.

Auston Matthews scored for Toronto to make it 4-3 with 8:00 left in the game to make the jovial crowd at Air Canada Centre sing “Sweet Caroline” in unison during a brief stoppage in play. However, Oshie netted the game-winning goal 59 seconds later on an odd-man rush.

Tyler Bozak, who scored the game-winner for Toronto in overtime in Game 3 on Monday, scored the Maple Leafs’ fourth goal to make it 5-4 with 27 seconds left while his team had an extra attacker. By then, however, it was too late.

TORONTO, ON – APRIL 19: T.J. Oshie #77 of the Washington Capitals blocks a puck against the Toronto Maple Leafs in Game Four of the Eastern Conference Quarterfinals during the 2017 NHL Stanley Cup Playoffs at Air Canada Centre on April 19, 2017 in Toronto, Ontario, Canada. The Capitals defeated the Maple Leafs 5-4 to even series 2-2. (Photo by Claus Andersen/Getty Images)

Alex Ovechkin Wants To Retire As A Washington Capital