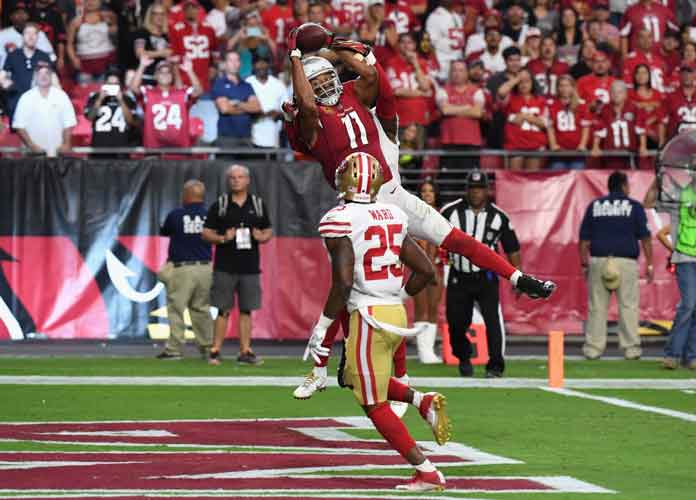 GLENDALE, AZ - OCTOBER 01: Wide receiver Larry Fitzgerald #11 of the Arizona Cardinals makes the game winning catch in the end zone during overtime in the NFL game against the San Francisco 49ers at the University of Phoenix Stadium on October 1, 2017 in Glendale, Arizona.

The NFL has simplified its catch rule, the league announced Tuesday.

During the Annual League Meeting on Tuesday, all 32 team owners voted to modify the catch rule for the 2018 season. The new rule was first proposed last week ahead of the meeting, with NFL Senior Vice President of Officiating Al Riveron stating the changes.

The new rules defining a catch include, per league statements:

“1. Control of the ball.
2. Two feet down or another body part.
3. A football move such as:
» A third step;
» Reaching/extending for the line-to-gain;
» Or the ability to perform such an act.”

The main change to the rule eliminated the “going-to-the-ground” element of the previous rule.

The league is attempting to avoid the frustration many coaches, players and fans expressed after some catches last season were ruled incomplete despite appearing complete. Pittsburgh Steelers tight end Jesse James had a touchdown reception overturned in a 2017 playoff game against the New England Patriots. During the 2014 postseason, Dallas Cowboys receiver Dez Bryant also had a catch that was controversial.

Of course, there could still be cases where it may not be immediately clear if a catch is complete or not, given the new conditions. Some expect the new rule to lead to an increase in fumbles.

Also at the meeting, owners decided to table what has been called the “Josh McDaniels Rule,” named after the Patriots offensive coordinator. This rule would have permitted assistants to be hired while their teams are still in postseason.

Furthermore, the New York Jets withdrew their proposal to make defensive pass interference a 15-yard penalty rather than a spot foul.

Here is the full list of rules approved by owners on Tuesday:

Dez Bryant Announces He Wants To Return To NFL