The 'Miracle In Miami': Dolphins Now Securely In The Mix After Wild Finish Vs. Patriots [VIDEO] - uSports.org 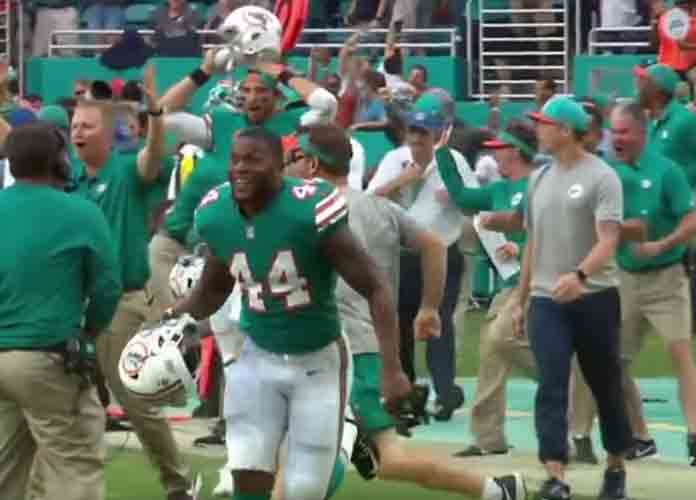 The ‘Miracle In Miami’: Dolphins Now Securely In The Mix After Wild Finish Vs. Patriots [VIDEO]

In what was one of the most energizing, blood-pounding finishes in NFL history, the Miami Dolphins defeated the New England Patriots 34-33 Sunday on a lateral play that saw running back Kenyan Drake score a 69-yard walk-off touchdown in the final seconds.

Kenyan Drake The Hero Of Miami After Miracle Play

Needing a touchdown to win, the play came after a desperate heave by Dolphins quarterback Ryan Tannehill to wideout Kenny Stills at the 45-yard line with just four seconds remaining in the game. Fellow receiver Devante Parker then swooped in for the pitch from Stills and looked around for help, which came in the form of running back Drake. After catching the flick from Parker, Drake flew around the sideline in New England territory before thrusting toward the end zone with a few Patriots on his tail. The game changer came when Drake’s speed disoriented Patriots tight end Rob Gronkowski, who was in at safety, assuming the Dolphins attempted a Hail Mary play. Gronk simply took a poor angle at Drake and stumbled on his attempt to make the game-saving tackle, which allowed Drake to waltz in for the score.

IT’S A MIRACLE IN MIAMI pic.twitter.com/PvNMIaXBAB

The Patriots, although still on pace to secure a bye week in the playoffs, now have to wait another week to get another try at winning the AFC East. Gronkowski was in disbelief following the gut-wrenching loss, citing that he was out of his element when on the field for the final play. “The way it ended, I mean, it sucked,” said Gronkowski in a post-game press conference. “Never really been a part of something like that, and I feel like its going to test our character big time, going through something like that. But I just gotta make that tackle.”

Perhaps the Patriots’ best defensive player, Gronk replaced Devin McCourty, who sat on the sideline for the play, which resulted in several fans and even former Patriots airing out the team. The decision to keep Gronk on the field for a play that required the Dolphins to go 70 yards, a distance that Tannehill likely would not be able to throw, brought Patriots coach Bill Belichick into question.

“Gronk was in because that is a “last play” defense,” said former Pats linebacker Ted Bruschi on Twitter. “The last play can be a hail mary pass. In a situation where chances of a hail mary are low, the “jumper” (Gronk) should be substituted for another safety/DB.  For tackling purposes. That was not done.”

Rodney Harrison, host of Football Night in America, said on the program that the typical genius of Belichick was its own victim on the play call. “Having Rob Gronkowski on the field for a 70-yard Hail Mary and keeping his best defensive player on the sidelines,” Harrison said, made coach Belichick “outsmart himself.”

Belichick himself didn’t exactly have much to say about his decision. “In the end, we’ve just got to do a better job than we did,” he said. “We missed opportunities”.

“It was me and Gronk, and I couldn’t let Gronk tackle me. Look sorry Gronk, he’s a great player but I got somewhere to be.”

Kenyan Drake describes his mindset on the final play and why this is extra rewarding given what he’s gone through this season. pic.twitter.com/hTzNZL5Zlx

The miracle that became the longest touchdown to win a game with no time left in NFL history was the Dolphins’ saving grace of a quietly potent NFL season, as the team’s playoff bid strengthens more with each highlight replay of one of the greatest plays in the history of the sport.