Russell Wilson On Teammate Michael Bennett's Incident With Vegas Police: 'It's A Matter Of Life Or Death' - uSports.org 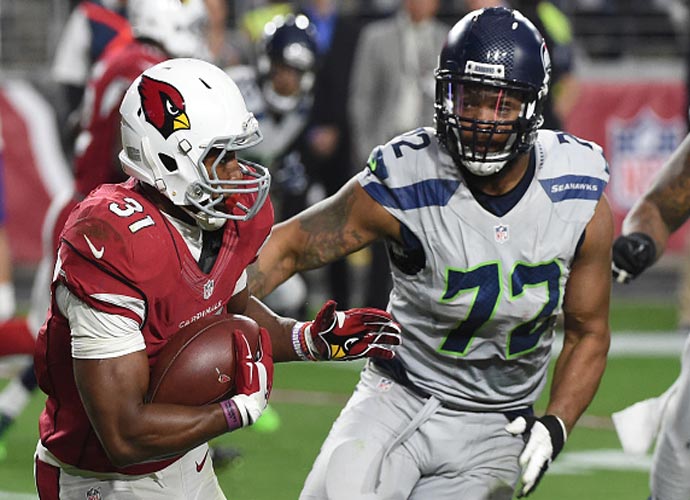 Caption:GLENDALE, AZ - JANUARY 03: Running back David Johnson #31 of the Arizona Cardinals carries the football in front of defensive end Michael Bennett #72 of the Seattle Seahawks at University of Phoenix Stadium on January 3, 2016 in Glendale, Arizona. The Seahawks defeated the Cardinals 36-6. (Photo by Norm Hall/Getty Images)

Seattle Seahawks quarterback Russell Wilson spoke out Thursday about an incident between teammate Michael Bennett and Las Vegas police that occurred last month, calling the unfolding of the events “heartbreaking.”

“When you see a person that you love, a person that’s your friend, a person who anybody honestly that’s put in a compromising position the way Michael was — it’s a matter of life or death, potentially all those situations that you see a lot of things are happening in our country right now,” Wilson told reporters Thursday.

Bennett, a Seahawks defensive end, posted a copy of a statement on Twitter on Wednesday in which he described how Las Vegas authorities allegedly used excessive force on him on Aug. 26 while he was in the city for the highly-touted boxing match between Floyd Mayweather and Conor McGregor that weekend. Bennett claimed police singled him out among a group of people who were fleeing away from what sounded like gunshots in a casino and ordered him to fall to the ground and pointed a gun to his head, all while threatening to “blow his f—ing head off” if he moved. The 31-year-old Seahawks defenseman then alleged a second Las Vegas Metropolitan Police Department officer forcefully jammed his knee into his back, making it difficult for him to breathe, before handcuffing him and eventually putting him in the back of a police car.

Bennett was not arrested or charged in the matter.

The 6-foot-4, 274-pound Bennett — who is black — finished off by saying that he is convinced this was simply another case of racial profiling by police, said he could “only imagine” how other young unarmed black Americans who were unjustly killed by police like Eric Garner, Trayvon Martin and Tamir Rice must have felt in those moments.

Bennett finished off his statement by saying he is aware of his rights to file a federal civil rights lawsuit against the Las Vegas Metropolitan Police Dept., whose Undersheriff Kevin McMahil has denied the officers’ actions were based on race. The Seahawks star’s incidents and comments come at a time of heated racial tensions in America, which have grown even more intense in the wake of a string of clashes between neo-Nazis and other white supremacist groups and counter-protesters — the first one in recent weeks occurred in Charlottesville, Virginia following the removal of a statue of Confederate General Robert E. Lee.

Bennett is one of several NFL players who protested the national anthem before games this pre-season, and said this experience inspired him to speak up more against social injustice.

Bennett’s brother Martellus Bennett, a tight end for the Green Bay Packers, broke down in tears during an interview with reporters on Wednesday while discussing his opinion on his brother’s experience. Martellus Bennett said he was “proud” of his brother for the way he handled the situation.

Caption:GLENDALE, AZ – JANUARY 03: Running back David Johnson #31 of the Arizona Cardinals carries the football in front of defensive end Michael Bennett #72 of the Seattle Seahawks at University of Phoenix Stadium on January 3, 2016 in Glendale, Arizona. The Seahawks defeated the Cardinals 36-6. (Photo by Norm Hall/Getty Images)