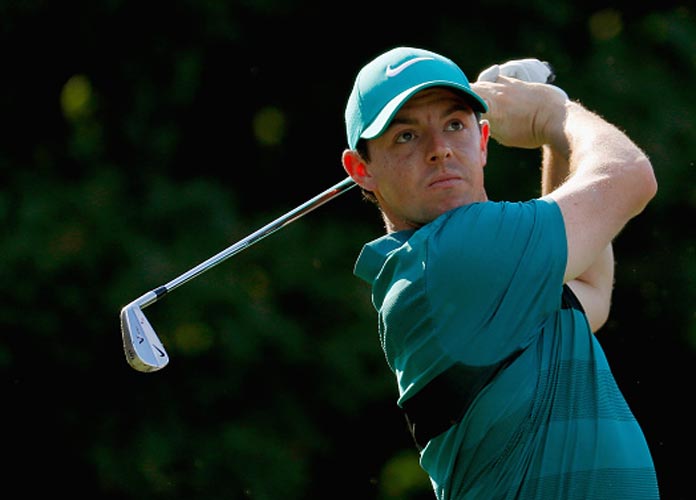 SPRINGFIELD, NJ - JULY 29: Rory McIlroy of Northern Ireland plays his shot from the 12th tee during the second round of the 2016 PGA Championship at Baltusrol Golf Club on July 29, 2016 in Springfield, New Jersey. (Photo by Kevin C. Cox/Getty Images)

The 148th British Open started early on Thursday morning in Portrush, Northern Ireland. Rory McIlory, native of Northern Ireland, didn’t start off the way he wanted to, hitting a quadruple-bogey on his first tee-off.

McIlory’s opening drive was struck out of bounds and hit a bystander, cracking the screen of her phone while it was in her pocket.

After hitting the ball out of bounds on his tee-off and acquiring an extra one-stroke, the Irishman re-hit his tee shot into the rough, this time on the left side. With three shots already tallied up, he took his fourth shot and ended up in the rough outside the green. He luckily recovered well, or it would have ended worse for him. He two-putted and finished hole one by computing eight strokes.

“I’m just treating this like any other Open Championship,” McIlroy said, according to ESPN. “I’ve played well here for the last few years. I’ve played well on this golf course. So I’ve just got to go out and hit the shots and stay in the present. If I just keep putting one foot in front of the other, hopefully by Sunday night that will be good enough.”

Rory McIlroy starts with a quadruple-bogey 8 on the first hole. Still might shoot 61, but then he’ll have to make the turn.

McIlroy entered the Open as 8-1 favorites in terms of odds, and immediately moved to 33-1 after his first hole, according to the York Daily.

Around the other participants in the tournament, Tiger Woods enters the tournament with three Open titles (2000, 2005, 2006), but struggled in the most recent Pebble Beach Tournament in the damp weather. The British Open tends to be relentless in terms of weather, and CBS Sports predicts Woods will struggle to endure this one.

Brooks Koepka has finished in the top-two in six of the last nine Open tournaments he has played in. He is on a hot streak right now in major tournaments. He placed second in the Masters at Augusta, won the PGA Championship and placed second in the U.S. Open at Pebble Peach. According to USA Today, he has a miraculous combined score of 43-under-par in the last six major tournaments. He places as the favorite after McIlory’s tough start in his home country.