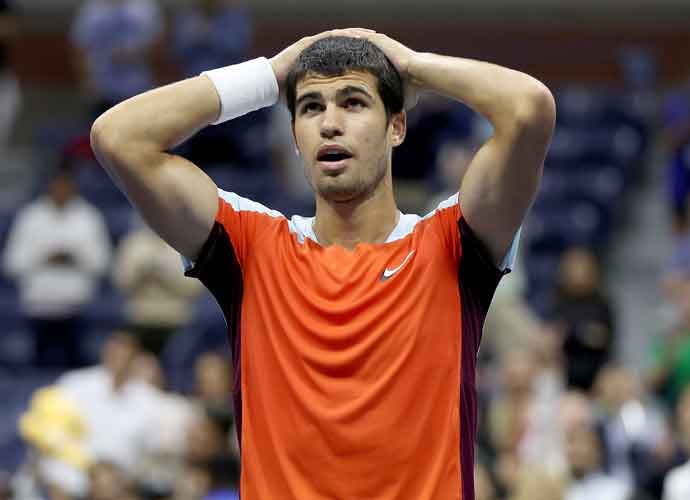 After five grueling sets, Carlos Alcaraz finally put away Jannik Sinner to win his U.S. Open quarterfinal early Wednesday morning and advance to the semifinals. The third seed in the tournament still has a chance of becoming the youngest No. 1 in the history of men’s tennis following two straight victories in five sets.

“I always say you have to believe in yourself all the time,” Alcaraz said after the match. “The hope is the last thing that you lose.”

Beginning at 9:35 p.m. on Wednesday and ending at 2:50 a.m. on Thursday at Arthur Ashe Stadium, Alcaraz’s match against Sinner took five hours and 15 minutes, making it the second longest in U.S. Open history and the latest to finish. The Spanish 19-year-old was coming off a five-set victory against 15th seed Marin Čilić.

The point of the tournament brought to you by @carlosalcaraz 👇 pic.twitter.com/ylewLwrqxu

Alcaraz took the first set Wednesday in fairly convincing fashion but lost the next two to Skinner in brutal tiebreaking fashion over the course of several hours. Facing match point, he came back to win the last two as night turned into early morning in an enduring upstart performance.

“I still don’t know how I did it,” Alcaraz said.

With current No. 1 Daniil Medvedev and perennial contender Rafael Nadal out of the tournament following early defeats, Alcaraz is one of a handful of players who could take over the top position with a win in the tournament. Though Nadal could technically still earn the spot, Alcaraz and fifth seed Casper Ruud control their own destinies in semifinal matchups Friday afternoon.

To make it to the final, Alcaraz will have to defeat American player Frances Tiafoe, who is making his own storied run in the tournament after defeating Nadal in the Round of 16 and becoming the first Black man to make it to the semifinals since Arthur Ashe himself in 1972.

Meanwhile, Ruud will 27th seed Karen Khachanov, the least familiar face in the quartet who defeated 12th seed Pablo Carreno Busta in the Round of 16. If Alcaraz and Ruud both win their semifinal matchups, they will play in the final for the world’s top ranking.