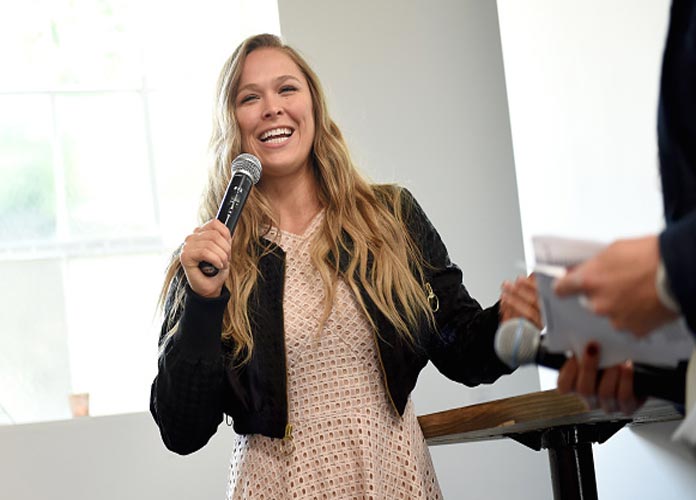 Ronda Rousey is officially throwing away her UFC gloves and switching to wrestling.

The former women’s bantamweight champion (and 2008 Olympic judo bronze medallist) has been rumored to ditch mixed martial arts for some time. She made a surprise appearance at the WWE Royal Rumble in Philadelphia on Sunday night.

Rousey, who will be 31 on Thursday, told ESPN that she is fully committed to the change, and not simply considering making random appearances at major WWE events.

“This is my life now. Yeah, they have first priority on my time for the next several years,” she said. “This is not a smash and grab, this is not a publicity stunt.”

Rousey added that she will attempt to get as much sleep as possible before any major competition, as she usually does.

“That was something my mom taught me,” Rousey said Sunday afternoon, before her appearance at Royal Rumble. “Judo tournaments last all day, so you have to sleep between matches. It’s hard at first, but then it just becomes this adrenaline dump.”

Rousey — who notoriously lost to Holly Holm in a bantamweight match in November 2015 after winning 12 straight MMA fights, including six UFC bouts — met with WWE executives, Triple H and Stephanie McMahon. She hung out with her longtime agent, Brad Slater, who also manages former WWE fighter and movie star Dwayne “The Rock” Johnson.

Rousey was moved to tears when Colton Toombs — the son of Rousey’s namesake, WWE Hall of Famer “Rowdy” Roddy Piper — presented her with his father’s leather jacket.

“He was just such a good man,” said Rousey. “He died the night before I beat [Bethe Correia]. I didn’t spend that much time with him, but he was such a huge influence on my life. He really made me realize how big of a responsibility I have because of what he did for me mostly from afar.”

“And he was such a great example of how to deal with everything and not taking things personal,” Rousey continued. “He’s promoting, he’s an entertainer, and he always understood that, and he would make himself hated in order to entertain. And he understood that that’s what it was for, to make everybody love him.”

Though Rousey has stayed away from UFC fights, she has followed a few of the fighters she admires, specifically straw-weights Joanna Jedrzejczyk and Rose Namajunas.

“Women’s MMA is new. It’s like a little baby deer finally standing up and being able to walk on its own,” Rousey said. “It just takes a little while. Little deer is gonna walk around for a while; it’s the only way it’s gonna get stronger and better at walking. I really believe in them. I believe they’re in a place where they can keep the sport around and celebrate it for women long after I’m gone. That’s what I’m hoping.”