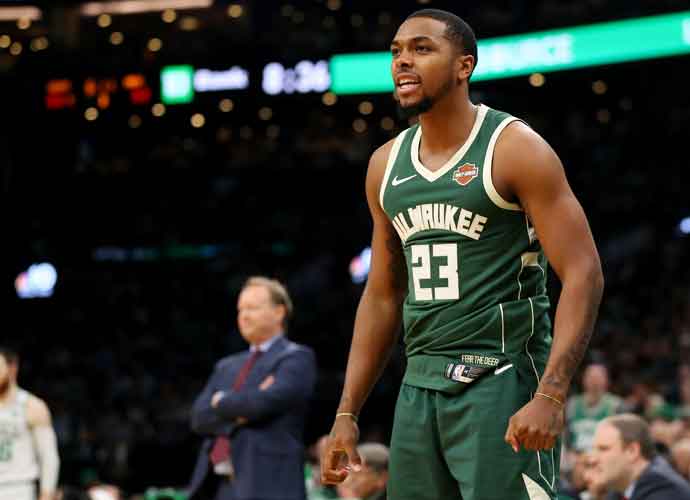 BOSTON, MASSACHUSETTS - MAY 06: Sterling Brown #23 of the Milwaukee Bucks celebrates during the second half of Game 4 of the Eastern Conference Semifinals against the Boston Celtics during the 2019 NBA Playoffs at TD Garden on May 06, 2019 in Boston, Massachusetts. The Bucks defeat the Celtics 113-101.

Pope Francis hosted players and officials from the NBA Players Association about their future plans and how they brought important attention to social justice issues and economic inequality. An assistant of Pope Francis reached out last week to the players’ association about Pope Francis’s interest.

The players association quickly agreed to a meeting and scheduled an overnight flight to the Vatican. The delegation consisted of players Kyle Korver, Sterling Brown, Jonathan Issac, Anthony Tolliver, the union’s secretary-treasurer, Marco Belinelli and Michele Roberts, the executive director of the players’ association. The delegation arrived Monday morning at 11:45 a.m. local time in the Vatican.

The meeting was held in the papal library of the Apostolic Palace for an hour. The players spoke about their “individual and collective efforts addressing social and economic injustice and inequality occurring in their communities.” The Pope was given gifts such as a basketball, a book with highlights of player’s efforts taken to address issues and a jersey.

Korver said of the meeting that “we are extremely honored to have had this opportunity to come to the Vatican and share our experiences with Pope Francis. His openness and eagerness to discuss these issues was inspiring and a reminder that our work has had a global impact and must continue moving forward.”

During the NBA restart in the “bubble” players and the league agreed to use their stage to bring attention to social justice issues, racism and police brutality. “Black Lives Matters” was painted on the sidelines. Players were allowed to use “Say their names,” “Equality” and  “Enough” on the back of their jerseys above their number. The majority of the players kneeled during the national anthem.

It was the Milwaukee Buck’s sudden strike against the Orlando Magic in the postseason that inspired sports leagues to follow similar actions. The players went on strike by sitting out of the game in response to the police shooting of a 29-year old Jacob Blake, a black man. Blake was shot in the back by police and was subsequently left paralyzed from the shooting.

Brown, Korver and George Hill who played with the Bucks at that time decided to sit out because of it. Brown himself was a victim of police brutality when was tased by police for a parking infraction in 2018. Brown sued the city and the police department and was able to settle the lawsuit earlier this year.