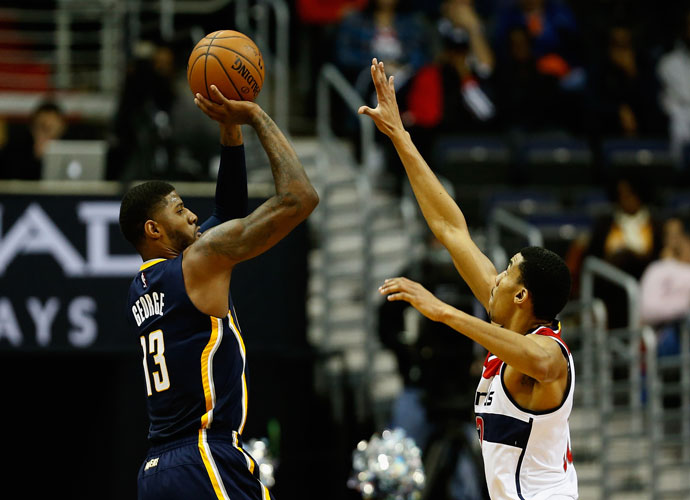 WASHINGTON, DC - NOVEMBER 24: Paul George #13 of the Indiana Pacers puts up a shot over Otto Porter Jr. #22 of the Washington Wizards in the first half at Verizon Center on November 24, 2015 in Washington, DC.

Paul George and Gordon Hayward both failed to make any of the three All-NBA teams on Thursday, which implies the veterans’ respective teams likely won’t be able to sign them to multimillion-dollar contract extensions this summer.

Hayward, 27, could become an unrestricted free agent on July 1, but the Utah Jazz guard only has seven years of playing experience. Thus, he would be ineligible for a $200–million extension unless he picked up his $16.7 million option for next season. Hayward, the 9th overall draft pick in 2010, averaged 21.9 points on 40 percent 3-point shooting in leading the Jazz to the second round of the playoffs this year. His omission from the 2017 All-NBA teams offers less financial incentive for his camp to remain in Utah past this summer. The Jazz can offer him a five-year deal , but Hayward will now forgo the opportunity to make $50 million more as a player for Utah through 2022.

George, meanwhile, won’t become eligible for a five-year extension with the Indiana Pacers this summer, as his yearly salary represents 35 percent of his team’s cap. The 27-year-old small forward and 2010 first-round draft pick (10th overall) is also scheduled to become a free agent in 2018. George averaged 23.7 points and 6.6 rebounds per game this season, and according to some estimates, his failure to make an All-NBA team this year could cost him up to $70 million or more, depending on how the final salary cap figures turn out.

Had George made one of the All-NBA teams this year, he would have become eligible for the Designated Player Extension that is part of the new collective bargaining agreement, which begins July 1. This designation would have permitted the Pacers to offer George the richest contract in NBA history, in addition to giving him a new five-year deal worth around $210 million.

This is approximately $75 million more than another team could grant George were the small forward to sign elsewhere if he did choose free agency in 2018. This new provision was incorporated into the system after Kevin Durant’s departure from the Oklahoma City Thunder in free agency last summer.

There have been rumors that the Pacers could attempt to trade George since they risk losing him after next season anyway.

Among the teams that offered to get George via a trade in February were the Atlanta Hawks, who offered four first-round picks in exchange for him. However, George — who says he was a fan of Kobe Bryant in his younger years — has previously stated a desire to play for the Los Angeles Lakers.

New Pacers president Kevin Pritchard met with George after Indiana was swept by the Cleveland Cavaliers in the first round of the playoffs. Pritchard told reporters the All-Star forward wanted to stay with the Pacers long term but also expressed an interest in being on a contender.

Players qualify for $200-million-plus deals if they make the All-NBA team the year prior to the extension or are named Most Valuable Player or Defensive Player of the Year. Furthermore, this only applies to players entering their eighth or ninth seasons when the contract begins.

Here are the full rosters for this year’s three All-NBA teams:

Harden, Wall, Curry and Westbrook are all eligible to sign new five-year maximum deal extensions this summer after making the 2017 All-NBA teams.

WASHINGTON, DC – NOVEMBER 24: Paul George #13 of the Indiana Pacers puts up a shot over Otto Porter Jr. #22 of the Washington Wizards in the first half at Verizon Center on November 24, 2015 in Washington, DC.