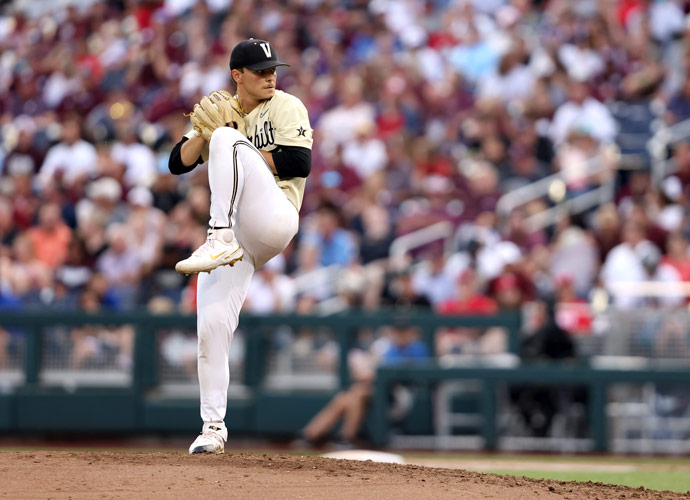 OMAHA, NEBRASKA - JUNE 28: Jack Leiter #22 of the Vanderbilt Commodores pitches in the fourth inning during game one of the College World Series Championship against the Mississippi St. Bulldogs at TD Ameritrade Park Omaha on June 28, 2021 in Omaha, Nebraska. (Photo by Sean M. Haffey/Getty Images)

With no consensus first pick in this year’s MLB draft, the Pittsburgh Pirates opted to take arguably the best bat in the class: catcher Henry Davis. Davis slashed .370/.482/.663 with 15 big flies this year in college. His arm behind the plate is sensational, although parts of his defense are lackluster. He is the second catcher drafted first overall in the past three years, with Baltimore selecting Adley Rutschman in 2019.

“I’ve done a lot of hard work to get here. Everybody in my life has helped me get where I’m at now and I’m excited to keep going … I’m going to do everything I can to help this organization get where it needs to be,” Davis said.

The first slot in the draft holds a pool value of over $8 million, although the Pirates will most likely try to strike a quick deal in order to have Davis sign for less.

Jack Leiter will not be heading to New York to play for the Yankees like he was supposed to when he was drafted years ago before opting for college. Instead, the second pick in the MLB draft will suit up for the Texas Rangers, where he has a chance to make an impact sooner rather than later. Leiter worked a 2.13 ERA and sent 179 hitters packing in just 110 innings.

“I’m just so happy I was able to have my family and friends and people that care about me all here to celebrate with,” Leiter said.

Outside of the top two draftees, the Tigers opted for pitcher Jackson Jobe with the third pick. Jobe is coming straight out of high school, where he produced a 0.13 ERA this season.

These picks were followed up by shortstop Marcelo Mayer going to Boston, outfielder Colton Cowser heading to Baltimore and shortstop Jordan Lawlar getting selected by Arizona.

The Royals made the first big surprise splash in the draft, opting for pitcher Frank Mozzicato even though he was seen by many experts as a second-round selection.

The biggest slide of a prospect in the first round was arguably Kumar Rocker, who went with pick No. 10 to the Mets. Rocker was long considered the best prospect in the class, but a rocky spring saw him slip nine spots.

This year’s draft is the first in which fans were able to watch live. It will span 20 rounds over three total days.

The deadline for players to sign is August 1, 5 p.m. EST.