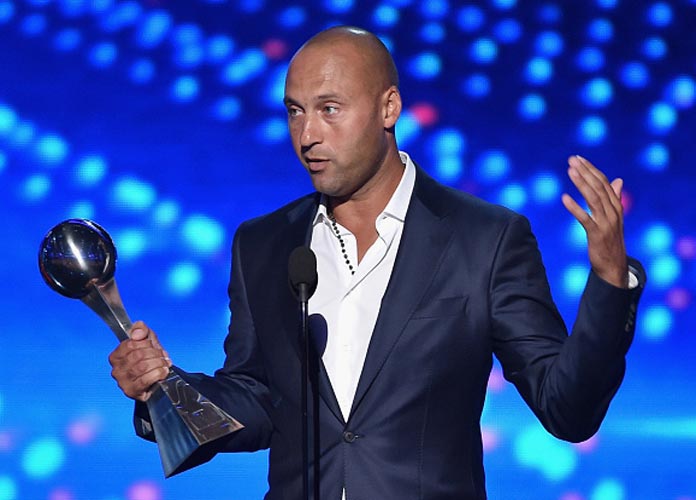 Honoree Derek Jeter accepts the Icon Award onstage during The 2015 ESPYS at Microsoft Theater on July 15, 2015 in Los Angeles, California.

Two legends of the game, Derek Jeter and Larry Walker, will be inducted into the National Baseball Hall of Fame in July after receiving enough votes on Tuesday to join the class of 2020.

The Baseball Writers’ Association of America had Jeter on 396 of the 397 ballots, just one vote shy from joining his former teammate Mariano Rivera as the only other player to be a unanimous selection. The 14-time all-star earned the second highest voting percentage at 99.7%, just above third place Ken Griffey Jr. (99.3%).

When asked about the importance of being a unanimous selection Jeter said, “Well, I look at all the votes that I got. Trying to get that many people to agree on something is pretty difficult to do. So that’s not something that’s on [my] mind.”

Jeter was nervous leading up to the announcement, although experts predicted he would be a “lock” for a Cooperstown selection. “Everyone told me it was a foregone conclusion. I didn’t buy it. So it was not a relaxing day. There was a lot of anxiety,” Jeter said. ”I was nervous — sitting around, waiting for a phone call is something that is completely out of your control.”

Jeter played his entire 20-year career with the Yankees before retiring in 2014 with a .310 batting average, 260 home runs and 1,311 RBIs. He was a five-time Silver Slugger and won five championships with New York. His 3,465 hits are the sixth most in MLB history and the most by a shortstop.

“This means a little more to me,’’ Jeter said. “I grew up a Yankee fan. It’s the only organization I wanted to play for. I was fortunate to play 20 years in New York with a lot of thanks to the [George] Steinbrenner family. That’s one thing I always want to be remembered as: remembered as a Yankee.’’

Leading up to selection time it was uncertain whether or not Walker would even make the cut. This was his tenth and final year of eligibility and as the day dragged on Walker was starting to lose hope. After checking in on Ryan Thibodaux’s vote tracker, Walker tweeted, “Although I believe I’m going to come up a little short today I still wanna thank all you that have been pulling for me and showing your support. I’m grateful for all of you! It’s been fun leading up to today reading everyone’s thoughts. Cheers [beer emoji] LW.”

As the former Rockies’ player awaited a phone call that would notify him of a Hall of Fame selection, he told ESPN, “I had it when they’re going to call, a roundabout time, and that time had come and gone. And there was two minutes after that when the call actually came.”

BBWAA secretary-treasurer Jack O’Connell eventually made the call and told Walker, “You didn’t come up short this year. You passed the 75% threshold, and welcome to the Hall of Fame.” Walker received 304 votes, six above the 75% required and much higher than last year’s 54.6% of the vote. According to ESPN Stats & Information, Walker’s increase of 22% in his last year of eligibility is the most among the seven players to get into the Hall in their last year of eligibility.

“Being Canadian, you’re born into this world with a stick in your hand and skates on your feet,” Walker said. “So that’s how I was as a kid. You played hockey, and that’s all that really mattered. When hockey didn’t quite go the way I wanted, baseball more or less found me.”