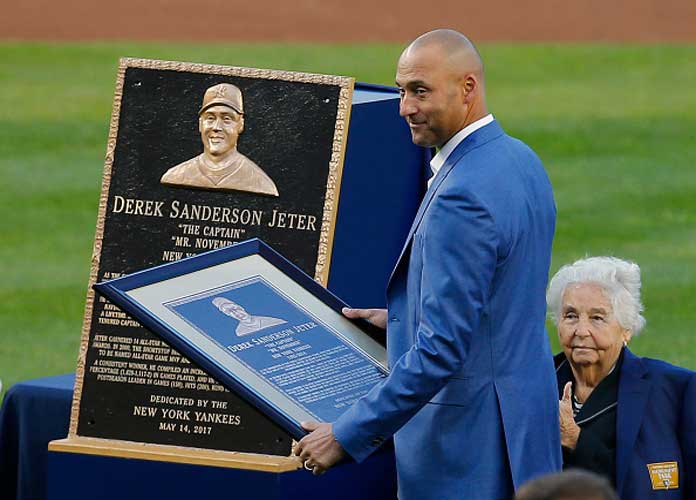 NEW YORK, NY - MAY 14: Former New York Yankees great, Derek Jeter stands in front of his plaque during a pregame ceremony honoring Jeter and retiring his number 2 at Yankee Stadium on May 14, 2017 in New York City. (Photo by Rich Schultz/Getty Images)

It’s not uncommon for a sports figure to make their Twitter debut in a bombastic fashion. However, no one keeps receipts the way Yankees’ legend and Hall-of-Fame shortstop Derek Jeter does.

Looks like I’ve officially run out of excuses. https://t.co/DQwmgjU9jW

And he is already as active on Twitter as one can be.

Jeter’s first day on Twitter consisted of him retweeting and promoting material for the ESPN documentary The Captain, which premieres on July 18. He also spent some time answering fans’ questions in a video “Ask-Me-Anything” through a partnership with Twitter Sports. In the video, Jeter reacted to fun tweets that fans have posted about him dating as far back as 2015. One of the tweets read, “my girlfriend just said she only knows who Derek Jeter is from the Other Guys.” Jeter responded to this by tweeting at Other Guys actor Mark Wahlberg, suggesting that he may need to cast Jeter in an upcoming movie.

Hey @markwahlberg, let me know if you need an extra in the next movie. #FanTweets @Twitter @TwitterSports pic.twitter.com/eqWff5C5bi

Jeter ended his eventful first day on Twitter with a sign-off fit for Mr. November himself. A GIF of the former Yankee celebrating during a game. Twitter isn’t the only social media platform that Jeter has decided to grace of late. He also created an Instagram account that same day, detailing in a Reel posted, “Figured I might as well go all out for this social media thing.” His Instagram now has gained over 219,000 followers.

Made it through my first day on Twitter. pic.twitter.com/bAidsTDzXs