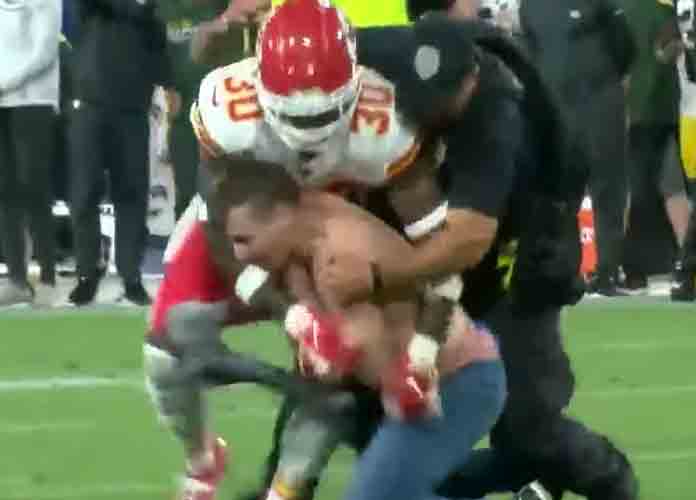 Thursday night’s game between the Kansas City Chiefs and the Green Bay Packers featured one of the best tackles of the preseason, as chiefs safety Harold Jones-Quartey took down a young streaker undressing while running the field.

A fan ran onto the field around the 10-yard line and headed straight for the center. He appeared to try to get to the other side. Security quickly ran after him from behind while more security came straight at him. To his credit, he outran security and turned right before heading to the center of the field to try to avoid them.

By the time the fan got to the 20-yard line, security was closing in but when it was apparent he was going to run again, Jones-Quartey ran from the 40-yard line and tackled him at the 25. There were two other Chiefs much closer who did not move and watched the NFL hopeful run past them. The man was taking off his shirt at the time he got tackled. The tackle will not count in Jones-Quartey’s preseason numbers.

Why the other NFL players did not move while the security went after him — and if that is protocol — is unknown. Why Jones-Quartey went after him is also unknown. However, it made for an entertaining final preseason game where backup quarterback Kyle Shurmur looked sharp, with an unfortunate interception in the first quarter as he got hit while attempting to throw. Packers star TY Summer caught the ball that went up in the air for a pick-six as he ran the ball 74 yards for a touchdown. The second quarter began with a fumble by Kansas City that Green Bay recovered.

Chiefs receiver Jody Fortson caught a couple of difficult passes by using his size and strength against undersized safeties. The Packers won 27-20.

Although neither team played most of its stars like respective quarterbacks Aaron Rodgers and Pat Mahomes, both teams’ players and game-calling looked sharp and ready for their Week one match-ups. The Chiefs start the regular season against the Jacksonville Jaguars on Sunday, September 8. The Packers open against their age-old nemeses, the Chicago Bears, on Thursday, September 5.

Chiefs safety Harold Jones-Quartey lays out the shirtless guy. In his defense, that was some good speed. Might get him a spot on a practice squad. pic.twitter.com/mjjkCTXLQs