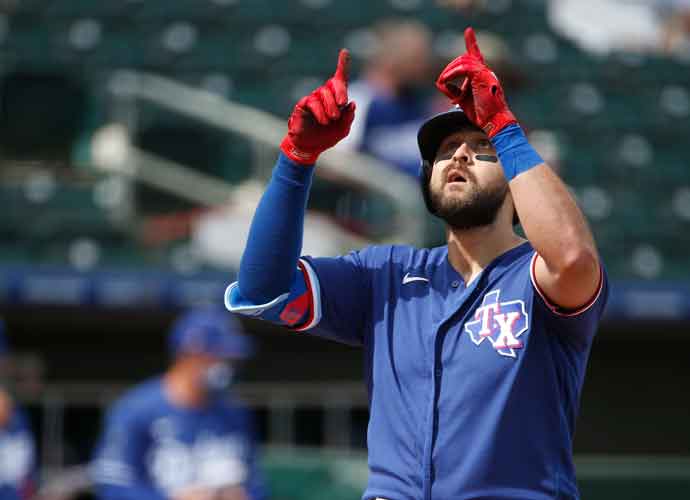 SURPRISE, ARIZONA - MARCH 07: Joey Gallo #13 of the Texas Rangers gestures skyward as he crosses the plate after hitting a home run against the Los Angeles Dodgers during the first inning of the MLB spring training baseball game at Surprise Stadium on March 07, 2021 in Surprise, Arizona. (Photo by Ralph Freso/Getty Images)

The New York Yankees have reached a deal with the Texas Rangers for All-Star Joey Gallo. This signing could provide the Yankees with a much-needed boost behind the plate.

“Wow, a guy that can hit it out of any ballpark. I don’t think he gets enough credit for the type of defense that he plays,” said Aaron Judge after hearing about the trade.

“Also, just talking with Rougy and a couple of guys that have played with him, man, what a guy that you want in your clubhouse, a guy that shows up every day ready to play. He’s going to fight until the very end. If that’s true and it comes true that we get him, I think it’s going to be something special for our team,” Judge added.

“That’s going to be huge, just to give the pitchers a different look,” Judge stated. “When we go up there with all right-handed guys, pitchers kind kind of get into grooves and kind of get into rhythms, but if you kind of mix it up a little bit and throw some lefties in there and a lefty that kind of bolt you on any pitch, it’s going to be big for this lineup and for this team.”

Gallo has a batting average of .223 this year with 25 home runs, 55 RBIs and leads the MLB with 74 walks. Gallo has also earned Gold-Glove recognition at first base, however he will likely take on a role in the outfield for the Yankees.

“He’s a great player and I have heard nothing but good things about him, so if it happens, I’ll be really excited. If do we get a guy like that, like wow, that would be a pretty good guy to add to the lineup,” infielder DJ LeMahieu said before the deal was finalized.

According to Yankees pitcher Chad Greene, Yankees players first heard about the news from a fan at Tropicana Field.

Gallo gave a heartfelt farewell to Rangers fans who have supported him since being drafted in 2012. “We don’t know the future and I don’t want to like miss an opportunity to tell everybody I appreciate it,” Gallo said. “I’ve been 10 years here. I remember last year when I almost got traded, there was like a lot that I was thinking, ‘Man, I wish I would have done this, I wish I would have said something.’ … I want the fans to know that I appreciate everything they’ve done for me and supporting me, and buying my jerseys and whatnot. You know, I really appreciate it.”