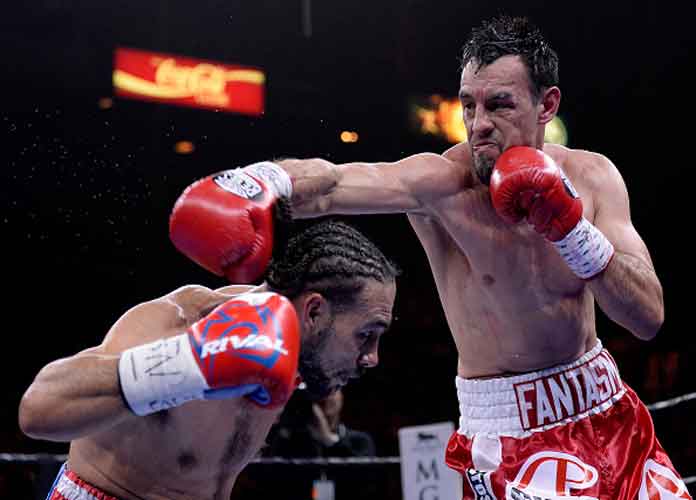 Robert Guerrero is both a two-time IBF featherweight and a one-time junior lightweight champion, but winning those three titles did not come easy for the Mexican-American fighter.

Guerrero, 34, boasts a straightforward yet rigorous daily training routine. In an exclusive interview with uSports.org ahead of his July 15 fight against undefeated former WBC lightweight champion Omar Figueroa Jr. at the Nassau Veterans Memorial Coliseum — the main card of a Premier Boxing Champions event at the recently-renovated arena in Long Island — the 5-foot-9, 147-pound boxer revealed what a typical workout day looks like for him.

“Typical training day for Robert Guerrero is get up at 5 in the morning, go for a nice run of at least 45 minute to an hour and then breakfast,” the southpaw told uSports. “After that, hit the cross-fit gym about ten o’clock to do my strength and conditioning workout, eat again, then relax a bit. Then I hit the boxing gym about 4-4:30 and just finish out my day there.”

Guerrero, who earned his nickname “The Ghost” because of his elusiveness in the ring, went undefeated in his first 12 professional fights as a rising 126-pound prospect, including an eighth-round stoppage of former world champion Enrique Sanchez in June 2004.

The Gilroy, California native learned how to box at the age of nine from his father. He tries several different types of exercises at the boxing gym.

“I do the whole rounds: shadow-boxing, jumprope, heavy bags, speed bags, double ends,” Guerrero said. “You name it, we do it.”

“I also do mitt work with my father, come home, have dinner, and then do it again the next day,” the boxer concluded with a smile.

Guerrero (33-6-1, 18 KOs) announced his retirement from his 16-year career on July 17 after his loss to Figueroa in Uniondale, New York.

“First, I want to thank God for allowing me to have a wonderful career,” Guerrero, 34, said in a statement. “I’m a kid from a small town in Gilroy, California, who made it to the mountaintop of the boxing world. When I was a young kid growing up, I always believed in myself, but never in my wildest dreams would I have imagined a small-town kid like myself would be fighting in front of millions of fans.”

Figueroa (27-0-1, 18 KOs) — who was coming off a 19-month hiatus from boxing — dropped Guerrero five times in total before the bout was stopped after three rounds, despite Guerrero starting off strong in the first round.

According to Compubox stats, Figueroa landed 88 of his 185 punches thrown (48%), whilst Guerrero landed 78 of 201 thrown (39%). The loss was Guerrero’s third straight defeat and his first by knockout. Guerrero — who also won interim belts at lightweight and welterweight — was coming off 11 months of inactivity.

According to Nielsen Media, the fight received up to 1,039,000 viewers on FOX Sports.