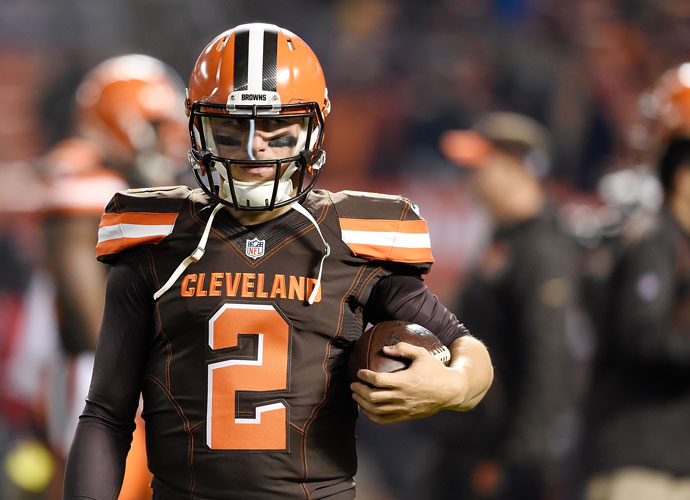 CLEVELAND, OH - NOVEMBER 30: Johnny Manziel #2 of the Cleveland Browns warms up prior to the game against the Baltimore Ravens at FirstEnergy Stadium on November 30, 2015 in Cleveland, Ohio. (Photo by Jason Miller/Getty Images)

It certainly isn’t the most popular opinion.

After his latest slip-up, Johnny Manziel will be absent from the field for the first four games of the 2016 NFL season due to the league’s suspension of the oft-troubled quarterback for breach of its substance abuse policy, according to reports.

But the fact remains, Johnny Football can still squeeze a quality career out of the talent that had scouts and reporters gushing when he entered the 2014 NFL Draft.

The obstacles Manziel must overcome to revive that career are numerous.

Growing concern over his substance abuse issues have now overtaken the weariness about his immaturity.

Maybe it is a mixture of both.

‘Money’ Manziel still faces charges for domestic violence stemming from a January incident in which his former girlfriend alleges he  “dragged her into his car ” outside of a hotel in the Dallas area, then “hit her several times” as the couple’s argument escalated while the vehicle was in motion.

Johnny Football has become a fixture on TMZ, pictured partying endlessly, despite the efforts of the Cleveland Browns front office and even his own father, who several times have attempted (unsuccessfully) to steer him back on course.

The latest sign came from Manziel himself, who has been living it up this offseason at his palatial vacation home in Cabo San Lucas.

Another desperate plea from his father to get help, however pointed, appears to have fallen on deaf ears.

“He’s a druggie,” Paul Manziel told ESPN’s Josina Anderson last week. “It’s not a secret that he’s a druggie. I don’t know what to say other than my son is a druggie and he needs help. … Hopefully he doesn’t die before he before he comes to his senses.”

Manziel’s father explained that he was able to convince his son to attend rehab earlier this year but “the system failed” and he was permitted to leave.

“I had him in rehab and he escaped and the doctors let him go,” Paul Manziel told Anderson. “He has more money than me, he can outrun me. Like I said, there are two things that are going to happen: He’s either going to die, or he’s going to figure out that he needs help. … You can’t just chase somebody who is not willing to listen.”

Few expected a public response from Manziel, fewer still expected he would apologize to his family for his actions.

But no one could have predicted what he would say, if he chose to speak at all.

Monday, Manziel posted a photo on his Instagram account, donning a Josh Gordon Browns jersey, with the following caption: “@flashgordonxii I won’t take this thing off for a week. You my brother FOR LIFE. JUST WAIT ON THIS COMEBACK!!!! #CaboWabo #JoshAintHere #hiDad #HappyBdayDaveEvans @akarambo_”

One day later Manziel told TMZ he was starting his comeback July 1.

At present, the former Cleveland QB is contending with a likely substance abuse problem, domestic violence charges, a family that has lost faith and a league imposed suspension (with the possibility of another coming down the pike).

Did I mention that he is not currently signed with any of the league’s 32 franchises?

So how could he possibly still have a future in the NFL?

For openers, he has hit rock bottom.

The depths which Manziel has fallen cannot be understated: from first round draft pick, to teamless free agent in two years flat.

It really can’t get any worse, so the only way to go, is up.

Rodgers didn’t begin his career until 2008, at the age of, wait for it … 24. Now the prized prospect of out Cal is throwing hail mary’s to win games and discount double-checking opponents into submission.

Manziel could miss the entire 2016 season and still have a solid shot at redeeming his fall from grace.

Remember, he has only played in 14 games, so his body, absent substances, is just as durable as it was when he entered the league in 2014. He can still sling it around the yard, he can still make plays with his legs and he can still become a franchise quarterback.

The team that chooses to take a chance on him will be in for a pleasant surprise.

“I do believe he’s serious,” an anonymous source told ESPN regarding Johnny Football’s comeback. “He’s talked awhile about knuckling down, getting ready and working out.”

Today, according to Manziel, will mark the first day of his new life.

He has pledged to get clean and get back to the promise people saw in him coming out of Texas A&M as the first sophomore to ever win a Heisman Trophy.

Ten years from now we could be talking about a perennial Pro-Bowler.

Kurt Warner’s NFL career didn’t get jump-started until he was 27. Steve Young sat behind Joe Montana for four years in San Francisco, not taking over as starter until 1991 when he was 29.

Young  is a Hall of Famer, Warner will be soon.

Manziel is every bit as talented as those two.

You can never underestimate the power of telling someone “you can’t.” Manziel has heard those words countless times over the course of his brief, but colorful, football career.

Look no further than the comments of Super Bowl 50 MVP Von Miller, who still believes Manziel can rise from the ashes of his own ruining.

“You can’t ever count anybody out and I think everybody who has counted him out is wrong,” Miller told reporters in April.

This isn’t the swan song for johnny Manziel, it’s the starting gun.

And the race for redemption is officially underway.