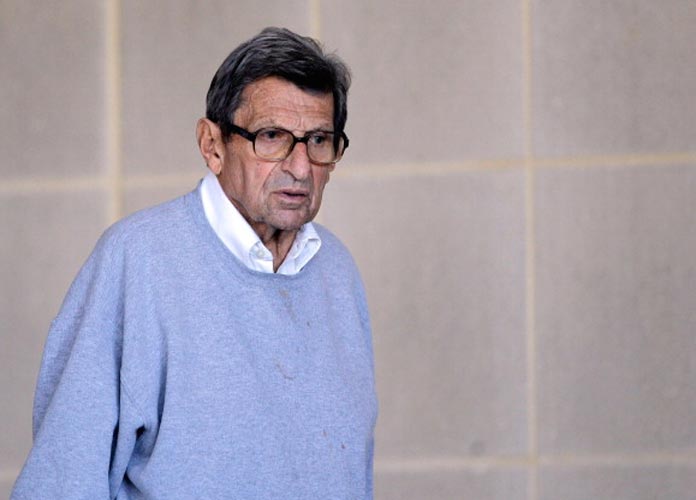 One victim, designated as John Doe 150, said he told Paterno that Sandusky had “put his finger in [the victim’s] rectum.” According to the victim, Paterno dismissed him, saying “I have a football season to worry about.”

“I was shocked, disappointed, offended,” the victim said. “I was insulted.”

John Doe 150 testified in court in 2014 that Joe Paterno had ignored his complaints of Sandusky’s sexual assault against him, which occurred in 1976 when the man was 14 years old.

Another victim, John Doe 75, was not interviewed for Sandusky’s criminal trial, but he described a 1987 incident in which coach Joe Sarra, also of the Penn State Nittany Lions, walked in when Sandusky had his hand down the victim’s pants. Sarra died in 2012.

“My mind was manipulated so bad that you think like some of this stuff is normal,” John Doe 75 said. “Like it’s scary.”

Ohio State defensive coordinator Greg Schiano and UCLA defensive coordinator Tom Bradley, both former Penn State assistants named in the documents, denied on Tuesday allegations that they– along with Paterno– were aware of Sandusky behaving inappropriately with boys long before law enforcement was first notified in 1998.

Another testimony included in the documents is from former assistant Mike McQueary. He testified that he witnessed Sandusky molesting a young boy in the university’s football showers in 2001.

McQueary stated he told Timothy Curley and Gary Schultz– two crucial members of the Penn State sports administration team at the time– what he had witnessed. He was contacted by the pair after reporting the incident to Paterno.

New in this deposition, however, is that McQueary had also discussed the incident with Bradley, who said “another assistant coach had come to him” with similar allegations in the 1990s, according to the deposition. That man was Schiano.

Over the years, Bradley has repeatedly denied knowledge of any of Sandusky’s abuse.

Curley and Schultz were also deposed as a part of the case. Both refused to answer most of the questions, citing their rights under the Fifth Amendment.

The trove of documents unsealed Tuesday came from a legal dispute between the university and an insurance company over the responsibility for nearly $93 million the school paid in settlements with victims. In addition, the Paterno family is suing the NCAA for defamation and commercial disparagement; the NCAA is considering utilizing some of the information unveiled Tuesday for its defense.

“Joe Paterno never engaged in a cover up of Jerry Sandusky’s crimes,” the family said in a statement. “The materials released today relating to Joe Paterno allege a conversation that occurred decades ago where all parties except the accuser are now dead. In addition, there are numerous specific elements of the accusations that defy all logic and have never been subjected to even the most basic objective examination.”

Paterno died of lung cancer at the age of 85 in January 2012, just two months after Sandusky was indicted on 40 counts of sex crimes against young boys by a grand jury following a two-year investigation. Sandusky was charged with an additional 12 counts of sexual crimes against children in December 2011, and was formally convicted in June 2012. He was sentenced to 30 to 60 years in prison in October 2012.

The 72-year-old former coach is appealing his conviction.

Sandusky was a longtime defensive coach for Paterno who was respected on the field for his football acumen and off the field for his charitable work before he was unmasked as a serial child predator. Sandusky met most of his victims through Second Mile, a charity he created in 1977 to help underprivileged youth. He often brought Second Mile children to the football team’s facilities on campus.

Penn State President Eric J. Barron additionally issued a statement regarding the documents’ release, emphasizing that “alleged knowledge of former Penn State employees is not proven, and should not be treated as such.”

“Penn State’s overriding concern has been, and remains, for the victims of Jerry Sandusky,” the statement continued. “While individuals hold different opinions, and may draw different inferences from the testimony about former Penn State employees, speculation by Penn State is not useful.”