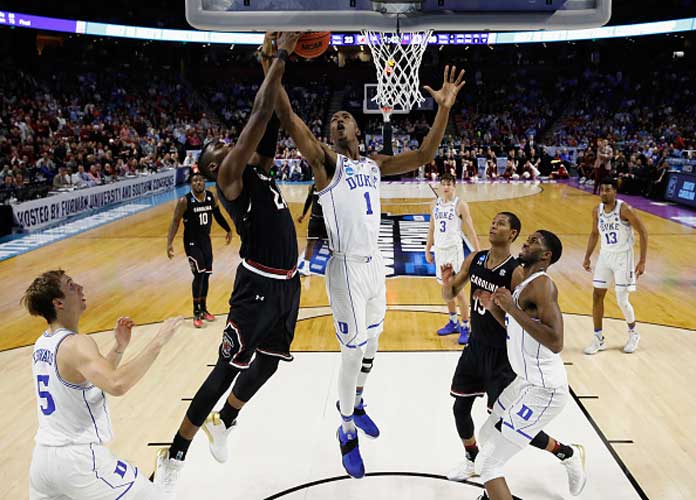 GREENVILLE, SC - MARCH 19: Harry Giles #1 of the Duke Blue Devils drives to the basket in the first half against the South Carolina Gamecocks during the second round of the 2017 NCAA Men's Basketball Tournament at Bon Secours Wellness Arena on March 19, 2017 in Greenville, South Carolina. (Photo by Kevin C. Cox/Getty Images)

The NCAA announced Tuesday it would “reluctantly” end its six-month boycott of championship events in North Carolina less than a week after the state’s legislature repealed a bill.

The law, known as House Bill 2 or HB2, required people to use public bathrooms that correspond with the gender on their birth certificate, rather than the gender they identify with. The bill, signed last year by then-Governor Pat McRory, a Republican, drew much ire among LGBT-rights groups for propagating discrimination against transgender individuals.

Last week, North Carolina legislators reached a deal to repeal the bill and replace it with HB142, a compromise bill approved by the Republican-controlled legislature and signed by Democratic Governor Roy Cooper.

The NCAA Board of Governors released a statement saying they approved of the replacement, although that if for any reason any type of discriminatory legislation is passed again, that the association would “take necessary action.”

“We are actively determining site selections, and this new law has minimally achieved a situation where we believe NCAA championships may be conducted in a nondiscriminatory environment,” the statement read. “If we find that our expectations of a discrimination-free environment are not met, we will not hesitate to take necessary action at any time.”

The NCAA added in its statement that championships previously given to North Carolina for 2017 and 2018 will remain in the state. The statement also said that “any site awarded a championship event in North Carolina or elsewhere be required to submit additional documentation demonstrating how student-athletes and fans will be protected from discrimination.”

Shortly after HB2’s enactment in 2016, the NBA announced during the summer that it would pull the 2017 All-Star Game from Charlotte, North Carolina, citing the bill as a reason. This year’s All-Star Game was ultimately held in New Orleans.

Similarly, North Carolina’s Senate and House officials also released a statement expressing their satisfaction with the NCAA pulling their ban.

“We are pleased with the N.C.A.A.’s decision and acknowledgment that our compromise legislation ‘restores the state to… a landscape similar to other jurisdictions presently hosting N.C.A.A. championships,’” the state’s Senate leader, Phil Berger, and the House Speaker, Tim Moore, both Republicans, said in a statement.

Not all legislators were satisfied with the replacement bill or the NCAA’s decision, however.

Representative Deb Butler, one of the only openly LGBT lawmakers in the North Carolina General Assembly, said she believes LGBT rights are still not completely protected with this new bill.

“If the North Carolina General Assembly would simply do the right thing, we wouldn’t be in this fix,” she told NBC News. “The overarching issue here is assuring LGBT citizens equal protection under the law in N.C. If the NCAA boycott gets us there one day quicker, my hope is that it would remain in place.”

“The N.C.A.A.’s decision to backtrack on their vow to protect LGBTQ players, employees and fans is deeply disappointing and puts people at risk,” Griffin said. “After drawing a line in the sand and calling for repeal of HB2, the N.C.A.A. simply let North Carolina lawmakers off the hook.”

Though HB142 eliminates the HB2 requirement that people in North Carolina use bathrooms that align with their birth sex rather than their gender identity, the replacement bill also prohibits cities from instituting their own anti-LGBT discrimination protections for LGBT people until 2020 and permanently blocks local legal protections for transgender individuals in restrooms.

Had House Bill 2 passed, the law would have created huge expenses for North Carolina. One Associated Press study found the bill could cost the state almost $4 billion over 12 years due to canceled NCAA events.

Other states have enacted or considered enacting laws similar to HB2, though not all are as broad as North Carolina’s. Several top leaders in Texas are considering an alike proposal known as Senate Bill 6.

GREENVILLE, SC – MARCH 19: Harry Giles #1 of the Duke Blue Devils drives to the basket in the first half against the South Carolina Gamecocks during the second round of the 2017 NCAA Men’s Basketball Tournament at Bon Secours Wellness Arena on March 19, 2017 in Greenville, South Carolina. (Photo by Kevin C. Cox/Getty Images)