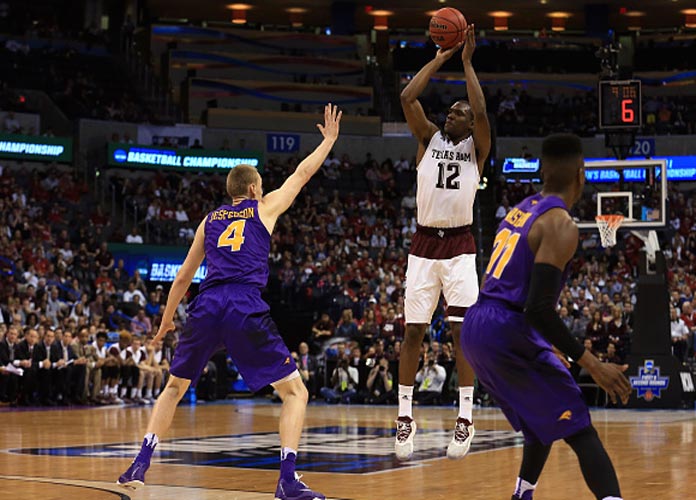 Caption:OKLAHOMA CITY, OK - MARCH 20: Jalen Jones #12 of the Texas A&M Aggies shoots the ball over Paul Jesperson #4 of the Northern Iowa Panthers during the second round of the 2016 NCAA Men's Basketball Tournament at Chesapeake Energy Arena on March 20, 2016 in Oklahoma City, Oklahoma. (Photo by Tom Pennington/Getty Images)

The NCAA has canceled Zac Collier‘s national anthem performance due to his use of an “offensive gesture.” The 27-year-old history teacher had apparently made the “Horns Down” gesture before the Women’s College World Series semifinal between Texas and Oklahoma State.

Collier, a Texas A&M alumnus, told the media that he had been singing the national anthem at sporting events for the past ten years, primarily Texas A&M, Houston Astros and Texas Rangers. According to Collier, he believes that it would have been offensive if he had made the gesture during an anthem performance. According to emails from the College World Series of Omaha, posted by Collier, the NCAA contacted them stating “we have documented proof that he made offensive gestures and mockery of a participating team … and we do not feel comfortable allowing him to perform.”

Zac Collier sang the National Anthem at the WCWS, and had been invited to sing it again at the CWS, but got his invitation revoked for flashing a Horns Down after singing last week. 😂https://t.co/O4MX9Y2ESq pic.twitter.com/wvPvihwZC1

According to a statement by an NCAA spokesperson, “The performance of the national anthem during NCAA championship events is a solemn moment for reflection and mutual respect for all championship participants and fans in attendance. Following his national anthem performance during the Women’s College World Series – during which the performer inappropriately supported one participating team, taunted the other team and disrupted participating student-athletes and coaches by attempting to interact with them – he was asked not to perform during the Men’s College World Series.”

The “Horns Down” gesture has caused controversy in recent years, after the Big 12 banned the gesture from being used by players, putting it in the same category as celebration fouls. Collier took to social media to express his displeasure at the NCAA’s move. “I’m a neutral party and showing my support or lack of support for a certain team after the anthem, I can see how somebody could be upset with that,” Collier said. “But the reason I posted wasn’t because I was upset that they said, ‘Hey, you shouldn’t have done that.’ It was because they called the Horns Down an offensive gesture. They said I mocked the other team. Those words specifically are why I posted about it. Saying that I’m making a mockery of a participating team because I put a Horns Down is ridiculous.”

Read more about:
College World Series CWS Oklahoma Texas
Listen to the uInterview Podcast!
Get the most-revealing celebrity conversations with the uInterview podcast!