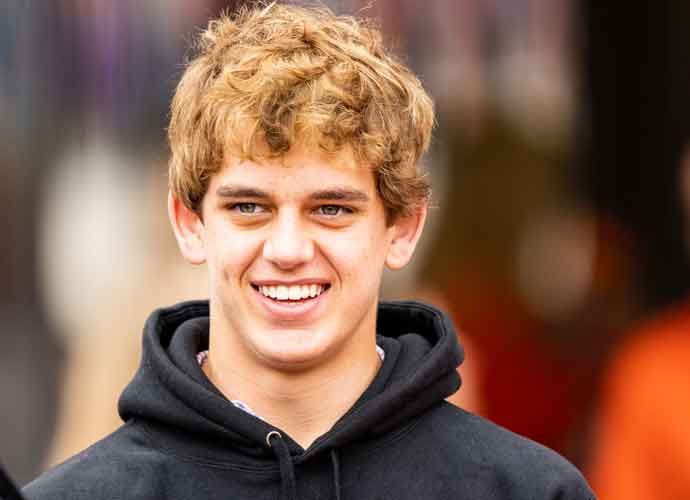 CLEMSON, SOUTH CAROLINA - OCTOBER 30: Arch Manning looks on during his recruiting visit to Clemson University before the game between the Clemson Tigers and the Florida State Seminoles at Clemson Memorial Stadium on October 30, 2021 in Clemson, South Carolina. (Photo by Jacob Kupferman/Getty Images)

Arguably the most coveted high school football recruit of all time, quarterback Arch Manning announced last week that he is committing to the University of Texas. The 18-year-old announced his decision on Twitter, opting for the low-key announcement as his first-ever tweet.

Committed to the University of Texas. #HookEm pic.twitter.com/jHYbjBaF5K

Manning had been highly touted since middle school. The son of former Ole Miss wide receiver Cooper Manning, grandson of legendary quarterback Archie Manning and nephew of Peyton Manning and Eli Manning. He had been the starting quarterback at Isidore Newman High School in New Orleans and was ranked as the number one player in Louisiana in the Class of 2023. He threw for 5,731 and 72 TDs in his first three years at Isidore.

Many had predicted that Manning would choose Texas after close friend and 3-star tight end Will Randle committed there earlier this week. Nelson Stewart, Manning’s high school coach said this was a natural decision for the young quarterback. “He made this decision on his own. This was his decision to make, I’m just happy he’s where he needs to be. He’s an 18-year-old kid. There was a lot on his shoulders. Took his time and showed a lot of maturities. When it comes to that family, the choice was his. It unfolded naturally. I’m just so proud of him, hope he can rest and enjoy his senior year with his friends and take that next step. There’s a huge ceiling in front of him,” Stewart said.

The recruiting process was extremely lengthy, according to Stewart. “Sark, besides being a genius in the passing game and second to none in football acumen and offensive ideology, he’s a good person. He and A.J. Milwee formed their own relationships. They really took the time to really recruit him. I was able to see it firsthand.”

This is Texas’s first No. 1 overall recruit since 2006 and their first Top 20 QB prospect since Garrett Gilbert in 2009. Texas coach Steve Sarkisian brings in Manning in hopes that further prospects would enjoy the idea of playing with such a talent.

With this commitment, Manning joins the rank of highly rated QBs to have played for Texas. Vince Young and Quinn Ewers have both played for the Longhorns.

Read more about:
College Football Manning NCAA Texas
Listen to the uInterview Podcast!
Get the most-revealing celebrity conversations with the uInterview podcast!