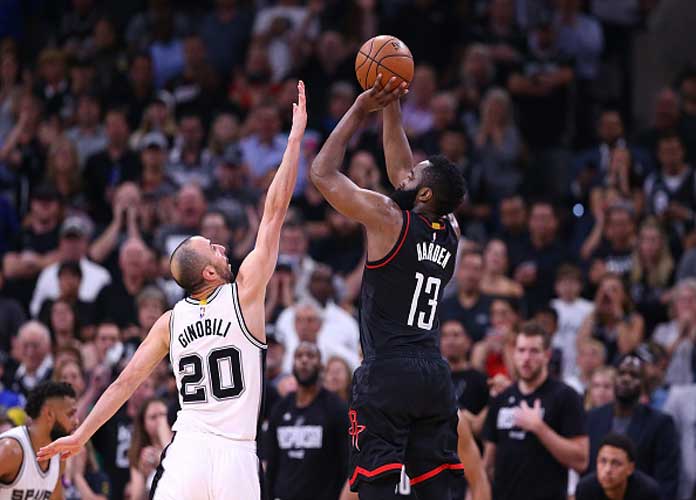 SAN ANTONIO, TX - MAY 09: James Harden #13 of the Houston Rockets takes a shot against Manu Ginobili #20 of the San Antonio Spurs during Game Five of the Western Conference Semi-Finals at AT&T Center on May 9, 2017 in San Antonio, Texas.

Manu Ginobili entered the NBA as an unheralded second-round pick out of Argentina. His first seasoned was marred by injuries and tough adjustments to a style of play in the NBA that seemed hellbent on kicking out international players.

Somehow, Ginobili adjusted, winning four championships as a key member of the San Antonio Spurs. He even took down Team USA, winning Argentina a gold medal in the Olympics.

Despite the dry San Antonio climate, there wasn’t a dry eye in the AT&T Center on Thursday night. It represented the end of an era for most fans. The soon-to-be Hall of Famer Ginobili sat with his two longtime teammates, Tony Parker and Tim Duncan, for what seemed to be the last time. Though Parker’s jersey will be retired soon and he’s making a last-ditch effort to extended his career with the Charlotte Hornets, the big-three that made fans forget all the winless years before them still shined bright.

“I’m telling you, I’m one of the lucky ones,” Ginobili said during a speech delivered partially in English and partially in Spanish. “I’ve been dealt amazing cards. I just had to play them OK. That was all I had to do.”

Duncan, Parker, coach Gregg Popovich, and Fabricio Oberto all delivered speeches. The ceremony took place after a 116-110 win over the Cleveland Cavaliers. Fans basked in the glory of the last two decades and watched Manu’s No. 20 jersey rise to the rafters, taking an eternal resting spot next to Duncan’s No. 21.

Patty Mills, Ginobili’s best friend on the team, played with special vigor, knocking down a three-pointer with 13.5 seconds left to seal a win.

“It’s a special day, a heartfelt day for a lot of people in the San Antonio community and far, far beyond,” Mills said. “He’s left a legacy that goes beyond what happens on the court. It’s been his passion, his energy, his competitiveness for the game that has really affected teammates, coaches and fans across the world. I’m very honored to be in a situation of being his teammate and being a close friend of his for many years.”

Last season, Popovich tried to convince Manu to stick around for one last year. The organization was in a major rehaul and would be without a single member of their big three for the first time since the 1997-1998 season. But Manu retired with a year left on his contract.

“He showed the folly of me trying to coach him too much, for sure,” Popovich said. “In the beginning, he was like a mustang out in the field someplace. That’s how he lived his life on the court. He was fearless, wild and did things that won games. So when I step back and look at, ‘Manu, I think that pass could have been a little bit better.’ That’s a pretty inane comment when he just did seven other things to help us win the game. So I basically learned to zip it as his career progressed. ”

“He was a skinny, little guy and wiry, strong, frenetic, fearless, physical and threw his body everywhere,” Popovich added. “He’d run into 7-footers. He’d get knocked down on the floor and get back up. Just the ferocity with which he played was infectious when we first saw him play as a youngster. That’s the first thing you see with Manu. Then, over time, his skills got better to where he became a 3-point shooter. He was always a fantastic passer. But he always had a knack for understanding what needed to happen to win a game. An offensive rebound or a steal in the passing lane — that type of thing that you wouldn’t expect. And it would be not out of the normal course of the game or game plan. He just did it on his own because he saw it and read it. Just a really intuitive knack for the game of basketball.”