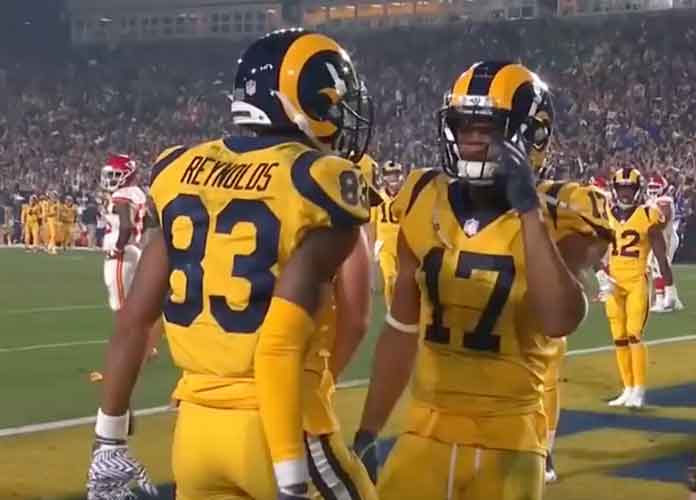 The Los Angeles Rams took on the Kansas City Chiefs in what looked to be an early Super Bowl matchup on Monday night.

Both teams were leading their conferences and the game was originally slated to show the NFL off internationally in Mexico City. However, after poor field conditions and numerous player complaints, the league finally moved the game to Los Angeles. Despite premier play on the field, the game took on an extra meaning.

The Los Angeles area has been devastated by wildfires in the past few weeks. The Rams practice at Cal Lutheran in Thousand Oaks, California, less than five miles from the scene of the Borderline Bar shooting that left 12 dead. The very next day, November 8, the Woolsey Fire broke out. That left three dead and burned down 1,452 structures and 96,949 acres. It left the community unable to even grieve. One tragedy led to another.

What an amazing tribute by @RamsNFL to all the first responders who came together in the last two weeks to protect and serve. #Teamwork #MutualAid #Honored #Humbled #Grateful https://t.co/EKMX15NlLP

“It was a devastating night, but when Ron (Helus) went in there and gave his life, no one else died,” Thousand Oaks police Sgt. Jason Robarts said. “The next day after the shooting, we’re putting on another hat and putting our emotions aside and helping residents evacuate and putting out fires until the department got there. After that was done, it was funeral services, so it’s been a seven-day stretch I’ve never experienced before in my life.”

In the grand scheme of things, the outcome of the Rams game means very little. In the context of the last few weeks, it means even less than it normally does. But the Rams used the game to reach out to the community, providing a bit of relief and relaxation.

More than 3,000 first responders and people affected by the tragedies were guests of the Los Angeles Rams. Once the NFL moved the game out of Mexico, the Rams announced that they’d provide complimentary tickets to first responders and those affected. While working with local fire and law enforcement agencies, they ensured the tickets got into the right hands.

“Many of our firefighters have been on the road for two weeks,” Ventura County Fire Department Captain Stan Ziegler said. “They haven’t seen their families. They haven’t been able to go home. Just to be able to come to the Coliseum and relax and be amongst their brothers and sisters who are firefighters who have been in the battle with them and get a chance to relax and watch a football game and eat a hot dog is just a fantastic boost for our morale.”

And the Rams didn’t stop at tickets. Karen and Jordan Helus, wife and son of Ventura County Sheriff Sergeant Ron Helus, who was killed in the Borderline shooting, lit the Coliseum Torch prior to kickoff. Dylan and Derek Adler, the sons of Sean Adler, who lost his life in the same shooting, served as the Rams’ honorary water boys for the game.

“I didn’t really expect anything,” said 17-year-old Dylan. “I was hoping to get through the memorial and go on with life as best as I can, and for them to contact us and for me to be on the sideline now is amazing. It makes me feel good that other people are looking out for me, and I didn’t expect any of that.”

“This is amazing … once in a lifetime experience. My heart’s beating so fast, I’m so happy.” said 12-year-old Derek.

The 50/50 for the game was donated to the Conejo Valley Victims Fund, American Red Cross Southern California Wildfire Relief and United Way of Greater Los Angeles. Firefighters were also recognized.

“No matter what we’re going through— whether it’s a fire, being in Colorado Springs, Mexico— this team is sticking together and finding ways to win games.” – @robertwoods pic.twitter.com/CrVBrd2upQ