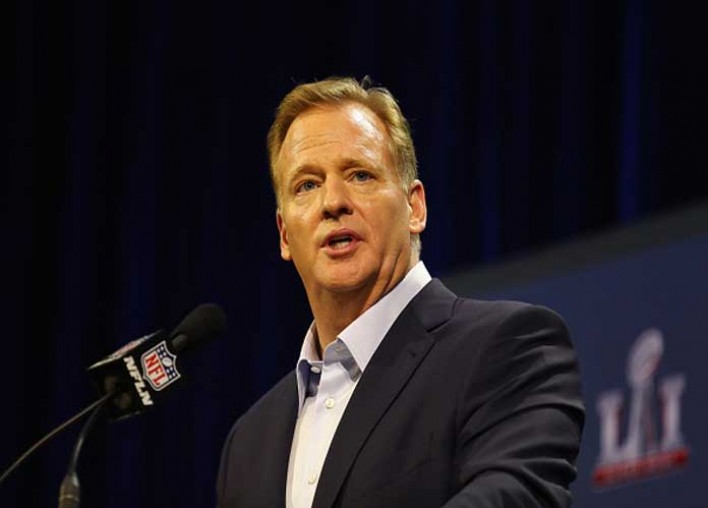 President Donald Trump may not typically have a great relationship with the NFL, but this week things were different, as commissioner Roger Goodell praised Trump for a recent trade deal.

Trump claimed at a rally in Rochester, Minnesota, on Thursday night that Goodell thanked him Tuesday for resolving a dispute regarding the NFL’s Super Bowl advertisements.

As part of the USMCA — the new trade agreement between the United States, Mexico and Canada that serves as the new version of the North American Free Trade Agreement (NAFTA) — Canada is now set to air American commercials on its television broadcasts during the Super Bowl. Canada agreed to join the new trade deal on Sunday.

“We greatly appreciate President Trump’s leadership and determination in bringing about a resolution to our intellectual property issue in Canada,” Goodell wrote in a statement issued by the NFL.

“I heard that the NFL had a problem with Canada on their advertising. A big, big problem,” Trump said at Thursday’s campaign rally. “I said, we’ve got to fix the NFL. It took me two minutes. And now our country will be taking tens of millions of dollars more money.”

Trump added, joking, that NFL players would probably still hate him despite earning more money as part of the new trade deal.

In 2016, Canadian regulatory agencies ruled that American Super Bowl ads would air on Canadian TVs for the first time ever.

Since becoming president, Trump has severely criticized Goodell and the NFL for its lack of punishment of players who protest the national anthem by kneeling. The move was started by Colin Kaepernick in August 2016 to make a statement about racial inequality and police brutality. In May, the league announced it would punish players who kneel for the anthem with fines and other sanctions, but allow players to stay in the locker room during the anthem. However, the NFL more recently said it is reviewing this new policy with the NFL Players’ Association, the union linked to the league.