LeBron James Will Unquestionably Be the Greatest Basketball Player of All Time If the Cavs Win the 2018 NBA Finals - uSports.org 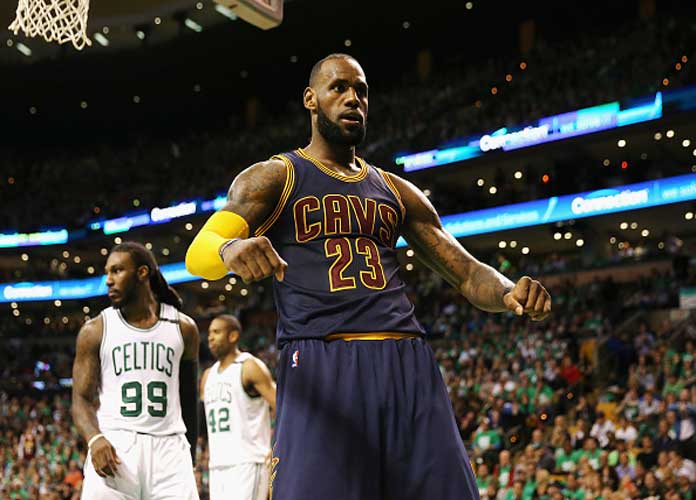 Discussing the all-time greatest of anything is an absurd topic which goes on and on forever due to the implicit subjectivity of its nature. Whether it be movies, music, books, television, basically anything, declaring one single entity as the greatest of its particular place in the world is never an easy task. All forms of media are constantly evolving, and it’s nigh impossible to truly determine who or what was the best ever at what they did.

Sports is one of the prime examples of these uncertainties, as they are constantly undergoing rigorous amounts of change within the span of just a few years. Take baseball, for example. Babe Ruth is largely regarded by many to be the greatest to ever play the game. His 714 home runs are still good for third-most all time, despite having ended his career 83 years ago. And while that number is obviously impressive, you have to take into account the time in which Ruth was playing. The man was out-homering entire teams at certain points in his career, and his 714 home runs absolutely shattered the previous record of 138 set by Roger Connor, who retired in 1897. To put that into perspective, that’s the same as some inhuman athlete taking Barry Bonds’s record of 762 and hitting over 5 times that amount, achieving the impossible total of 3,942 home runs. That’s one home run per 2.5 of Bonds’s career at bats. It’s almost certainly never going to happen, but you have to keep that in mind.

So one can’t help but wonder: if Babe Ruth played in the 21st century, would he have hit almost 4,000 home runs? Would he have maintained the same statistics he had in the ’20s and ’30s? Or would he have struggled against the type of pitching he would face today and been a guy who would hit 400 home runs while batting .220? Back in Ruth’s playing days, pitchers were still closing out their own starts on a regular basis, and their pitch velocities were nowhere near what they are today. My point here is that we could never know how Ruth would fair in today’s MLB since he played so long ago, but what if he had played in just the past few decades? Now there’s the discussion that has circled the world of basketball for the last few years.

Michael Jordan dominated the NBA like no other player before him. From the moment he stepped on the floor, the world knew his name. He led the league in scoring each year from 1986-87 through 1992-93, and as we all know, he capped off the final three seasons of that span by leading his Chicago Bulls to three straight NBA Finals victories. Then, after taking two years off to play Minor League Baseball, he returned to basketball and led the Bulls to another three straight Finals victories. He finished off his career with the record for average points scored per game over the course of an NBA player’s career, is now fourth on the all-time scoring list (and would definitely be higher had he not taken those two years off in the mid-’90s), and was undoubtably considered the greatest basketball player of all time. There was never a doubt in anybody’s mind about that title…until a certain kid from Akron, Ohio came along.

LeBron James is unlike anything basketball as seen before. At 6’8″ and 250 pounds, he is strong enough to match up with any big man in the NBA, capable of barreling through the staunchest of defenses and posterizing anybody who dares get in his way. However, he also contains an immaculate basketball IQ, court vision, speed, quickness, and ball-handling abilities, which enables him to run the point as well as any guard in the league. LeBron is the ultimate basketball player, and has been deemed good enough to be considered in the same context of greatness as Jordan, with discussions being held as to whether or not he should hold the title of GOAT. The debate which has been raging for years, and I’m here to tell you that I think it’s over with the hottest of all basketball hot takes: LeBron James is the greatest basketball player of all time, and I truly believe that everyone else will jump on that bandwagon if his Cavaliers somehow, some way manage to win the NBA Finals this year.

But let’s back up for a quick second and talk about why I find him to be the greatest ever, despite not having won the 2018 Finals as of right now. Jordan was a scorer, first and foremost, and was the greatest to ever do so, and that includes LeBron. His per game scoring record is something of legend, and it’s a mark which LeBron will almost definitely never reach. Jordan was as clutch as could be, with his last second midrange shooting becoming just as iconic as his “I don’t care about gravity”-style dunks. Jordan was almost equally as elite on defense, making several first team all-NBA defensive teams and becoming the first player in NBA history to take home both the Defensive Player of the Year and MVP awards in the same season. It is, however, his offense for which he is most remembered.

Playing basketball is more than just scoring and perimeter defense, though. Teams require players who can read defenses, make passes, grab tough rebounds, and anticipate everything that’s going to happen on a given play, and LeBron has Jordan edged in all of those categories. Over the course of his illustrious career, LeBron has averaged 7.4 rebounds per game and 7.2 assists per game, which edge out Jordan’s career averages by 1.2 rebounds and 1.9 assists. LeBron is already 11th all time in total assists and could very well enter the top 5 by the time his career is said and done.

So these are the non-negotiables: Jordan was the better scorer and perimeter defender, LeBron is the better rebounder and passer (throw interior defender in there as well, thanks to his size and strength). Cut and dry, that’s just how it is. However, when it comes to the MJ-LeBron debate, one number is always paramount among the discussion: how many championship rings adorn each player’s fingers, and that’s where my prior rambling about Babe Ruth comes into play.

The ’80s and ’90s were a completely different era of basketball. Mid-range shooting was the lay of the land on offense, with teams working primarily on fundamental basketball. Elite athleticism was a big bonus but not a requirement, which was a huge part of what made MJ so special. Not only was he an elite mid-range shooter, but his jumping and dunking abilities were unparalleled. This combination of savvy shooting and unequalled athleticism was what propelled Jordan into the unstoppable force that he became, and allowed him to lead his team to six NBA championships.

However, that is entirely not the case in today’s NBA, which has all but abandoned the mid-range game in favor of driving to the basket at full speed and/or shooting from beyond the three-point line. What this entails is that one of the two biggest facets of Jordan’s offensive game would be severely hindered. His driving ability would still be invaluable, but his shooting? Maybe not so much, as he likely would not be taking nearly as many mid-range shots. Moreover, he was never a great three-point shooter, hitting 32.7% of his shots from deep over his entire career and only surpassing 38% in a single full season once, so there’s reason to believe that his scoring numbers would take a pretty big hit. And it obviously goes without saying that LeBron is perfect for today’s NBA, considering the amount of success he’s had in the modern basketball culture throughout his entire career.

Despite all of his success on the court, though, LeBron “only” has three rings and has lost in the Finals four times (a misfortune which never found Jordan). That’s a discussion in and of itself, but perhaps a bigger argument is in regards to the fact that LeBron couldn’t win a championship without forming “super teams” in Miami and his second stint in Cleveland. It’s more or less true: he needed Dwyane Wade, Chris Bosh, Kyrie Irving, and Kevin Love to win championships, but it’s not like Jordan didn’t have any help either.

Basically, it’s almost impossible to win a championship in today’s NBA without at least two star players (except for the Dallas Mavericks in 2011), so that “super team” argument is irrelevant. And even if it weren’t, the 2015-16 Golden State Warriors were the best regular season team in NBA history, and LeBron and the Cavs still managed to beat them in the Finals. That was nothing short of incredible, and Golden State’s addition of superstar forward Kevin Durant going into the following season has made them even better.

With the Cavs meeting up with the Warriors in the Finals for the fourth time in a row, which also marks LeBron’s eighth consecutive trip to the championship round (an amazing feat on its own), I firmly, firmly believe that LeBron could cement his place as the undisputed greatest basketball player of all time. Perhaps other than his 2006-07 team, this years Cavaliers squad is the worst team LeBron has ever taken to the Finals, and he has done so with every other player on his back. In this postseason so far, he is scoring 34.9 points, 9.2 rebounds, and 8.7 assists per game, making this arguably the best playoffs run in NBA history. He has singlehandedly brought this team to where they are now, and they very well could have won Game 1 had it not been for JR Smith being entirely unaware of the game’s score and dribbling out the clock when he shouldn’t have.

What LeBron has done and continues to do on a basketball court is as incredible as it gets, and at 33-years-old, he’s playing as well as ever and shows absolutely no signs of slowing down. This year’s Finals will arguably be his fiercest challenge, the likes of which Jordan had never seen, and if Cleveland somehow manages to come out on top of the series, LeBron will have cemented his status as the greatest basketball player of all time. Like I’ve said, I already see him as the best, but such a monumental achievement would make any debate to the contrary very, very difficult to make.

We’ll see if LeBron can move ever closer to the true NBA crown when he and the Cavs take on the Warriors in Oakland for Game 2 of the NBA Finals on Wednesday, June 6 at 9:00 pm EST.