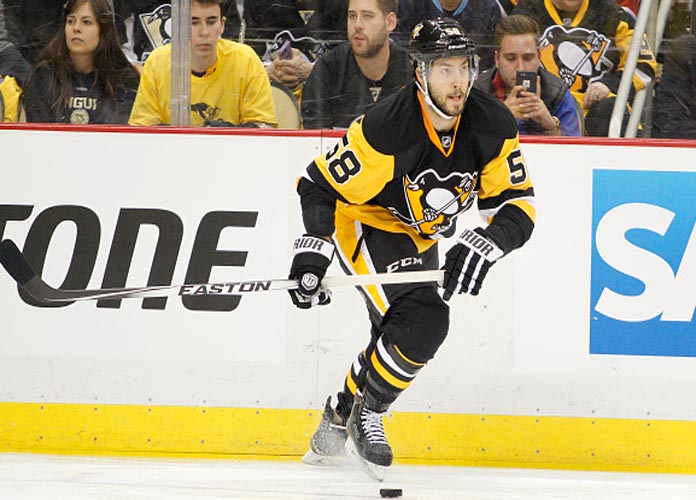 PITTSBURGH, PA - APRIL 13: Kris Letang #58 of the Pittsburgh Penguins in action in Game One of the Eastern Conference First Round during the 2016 NHL Stanley Cup Playoffs against the New York Rangers at Consol Energy Center on April 13, 2016 in Pittsburgh, Pennsylvania. (Photo by Justin K. Aller/Getty Images)

Remarkably, Pittsburgh Penguins defenseman Kris Letang has been back on the ice just days after going through a scary situation.

Before the team practiced on Tuesday morning, the former Norris Trophy finalist was shown on video skating by himself.

He did some stick handling and shooting drills.

Kris Letang on the ice (as is Poehling) before the 10:30 morning skate. -DP pic.twitter.com/idgoqx3UNA

According to head coach Mike Sullivan, he skated by himself last Thursday as well and said it was something for his mental health while he gets tests done.

Sullivan this morning did not pinpoint a timetable.

“Obviously, he skated this morning. Nothing significant to report from a change standpoint.”

But Sullivan has noted that Letang has looked “really good” and is “making progress.”

But regardless this is great news considering what was reported last week.

The Penguins said he would continue to undergo testing and that he would be out indefinitely.

The situation marks another tough break for Letang who has now suffered his second stroke in his hockey career.

The first one occurred in 2014 and it forced him to miss more than two months.

“His condition is not believed to be career-threatening,” the Penguins said in a statement.

In addition, Letang has had a tough time with other injuries as well.

Throughout his career, he has suffered multiple concussions and broken bones.

Letang is coming off his best individual season in terms of scoring, registering 68 points in 78 games.

It’s unclear when he will return but you have to think the news is about as good as it gets after learning what happened just a week ago.

Read more about:
Kris Letang Pittsburgh Penguins
Listen to the uInterview Podcast!
Get the most-revealing celebrity conversations with the uInterview podcast!