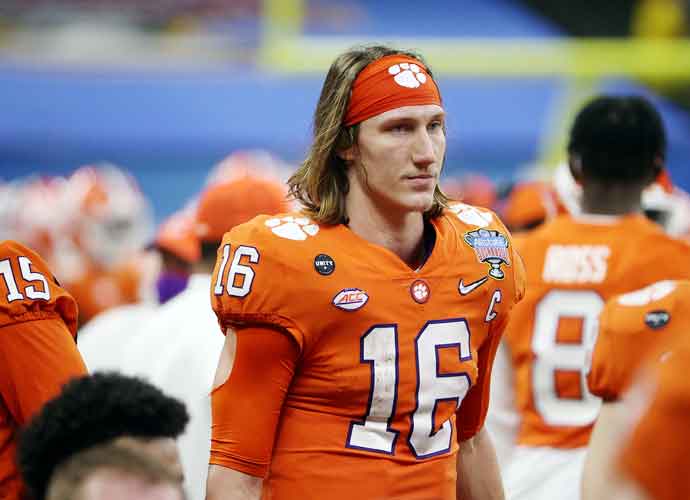 NEW ORLEANS, LOUISIANA - JANUARY 01: Trevor Lawrence #16 of the Clemson Tigers looks on in the second half against the Ohio State Buckeyes during the College Football Playoff semifinal game at the Allstate Sugar Bowl at Mercedes-Benz Superdome on January 01, 2021 in New Orleans, Louisiana. (Photo by Chris Graythen/Getty Images)

The Jacksonville Jaguars have finally drafted Clemson quarterback Trevor Lawrence with the first pick of the 2021 NFL Draft on Thursday.

Last season, it was a race between the Jaguars and the New York Jets in obtaining the first pick of the draft. At the time, New York was more likely to get the first pick because the team had the worst record and the Jaguars had the second-worst record, but Jacksonville was saved by the Cleveland Browns. The Jets pulled off an unexpected upset in their Week 16 victory over the Browns, allowing the Jaguars to hold the first overall pick.

Everybody in the world knew that Jacksonville was going to draft Lawrence with the first overall pick. Lawrence has talent and everything the Jaguars need in a quarterback. Lawrence went 34-2 as a starter for Clemson. The newly drafted quarterback never lost a regular-season game and threw for 10,098 yards and 90 touchdowns with only 17 interceptions, and he ran for 231 yards and 18 additional touchdowns.

“Pretty surreal,” Lawrence told ESPN’s Marty Smith shortly after being picked. “Obviously this has been the dream for the past few years, and like I’ve said, I didn’t even dream this as a kid, so [it’s] really special and just having all the people that I care about here watching, it’s really hard to explain.”

The quarterback also talked about his nervousness and excitement about playing for the team. “I was super nervous before and just am so excited to be a part of the Jacksonville community,” Lawrence said. “I’m super excited to be coming to Jacksonville and play for you guys and can’t wait to go to work.”

The team believes that it has found its new franchise quarterback in the talented 21-year-old quarterback, but Lawrence knows that he will have to prove himself. “I’m not expecting anyone to hand me anything,” Lawrence said. “I want to come in there and earn the respect and trust of my teammates and the right to lead the team.”

Clemson coach Dabo Swinney has faith in Lawrence, who he coached for years. “This’ll be a very easy transition,” Swinney said. “He’s well prepared in what he’s stepping into, the expectations, all those things, that’s his normal, and it has been for a long time. He’s built the right way, he is the epitome of consistency, and if you know anything about Urban Meyer, he values consistency and toughness.”

The team drafted Lawrence’s former Clemson teammate running back Travis Etienne with the No. 25 pick. Jaguars coach Meyer drafted the running back to add speed to the team. “The idea of offense is you can create matchup nightmares, and I’ve had some good fortune over the years to have a guy that can do both, flex out [and carry the ball],” Meyer said. “[Etienne] is as good outside as a receiver as he is as a running back. High-end character guy that has elite speed.”