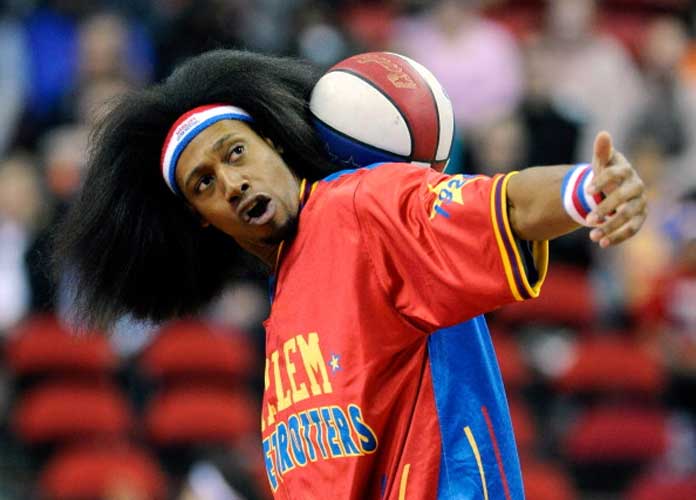 LAS VEGAS, NV - FEBRUARY 12: Alexander 'Moose' Weekes #45 of the Harlem Globetrotters performs before an exhibition game against the World All-Stars at the Thomas & Mack Center on February 12, 2014 in Las Vegas, Nevada.

Harlem Globetrotter Moose Weekes On His Diet by uSports

In an exclusive interview with uSports, Weekes — who studied wellness and exercise science at Middle Tennessee State — said he is often ribbed by his teammates because of his salubrious eating habits.

“Sometimes I get teased for being so ‘health-oriented,’ but I really always try to take care of my body and identify something that’s wrong with me if I’m not feeling my best,” the basketball star said with a smile. “I can always tell when one hair is out of place but outside of that knowing when my body feels a little off and how to address it immediately, I can get back on track to being the Moose everyone is accustomed to seeing.”

Weekes boasts a strange list of dietary habits. According to his bio on the Globetrotters page, the 6-foot-8 forward traditionally eats bee pollen and drinks coconut water before games. He also claims he is willing to eat pizza with any kind of topping except for onions.

The father of one also said he is a fan of organic foods. “I was always told that if you ask, you shall receive,” Weekes said. “So I might try to change the menu when I order, but you never know it unless you ask. Sometimes they might say ‘We just have salmon,’ and I’ll say something like ‘Is there any way I could get that blackened?'” the Gobetrotter said this last phrase in a very comical way reminiscent of a food snob, albeit with an expression that hilariously parodies this subgroup of people.

With regards to his diet staples, Weekes simply explained: “My upbringing has always been kind of within the realm of holistic healing, natural health and eating clean.”

The Globetrotter cited his grandfather, aunt and mother as his influences for eating healthy. Weekes recalled fond memories of drinking carrot juice with his grandfather despite what nearly everyone he knew said about how distasteful this sounded, or of eating fruits like mango and fresh pineapple with his mother, who hails from the island of Trinidad.

Weekes confirmed his love for coconut water, given his family comes from an island, but said bee pollen was no longer much a part of his regular diet.

“I found other things, that bio is from a few years back. Been out here a while,” the basketball star said, smiling. “There’s always new things in health and wellness, so I try to keep up with the times and find what’s best for me.”

LAS VEGAS, NV – FEBRUARY 12: Alexander ‘Moose’ Weekes #45 of the Harlem Globetrotters performs before an exhibition game against the World All-Stars at the Thomas & Mack Center on February 12, 2014 in Las Vegas, Nevada. (Photo by Ethan Miller/Getty Images)