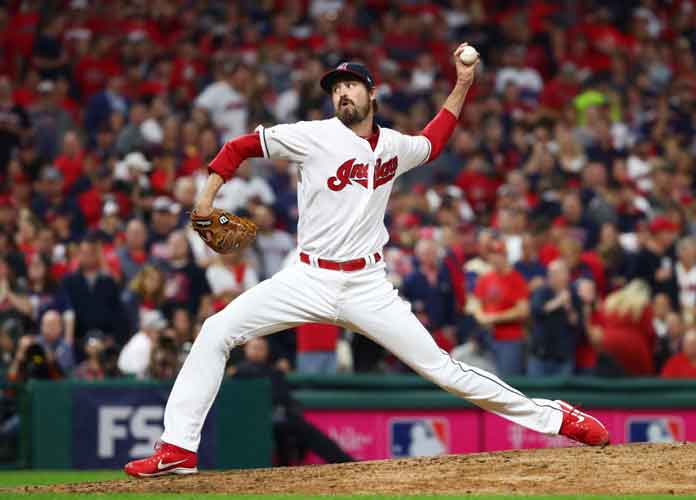 CLEVELAND, OH - OCTOBER 05: Andrew Miller #24 of the Cleveland Indians delivers the pitch during the seventh inning against the New York Yankees during game one of the American League Division Series at Progressive Field on October 5, 2017 in Cleveland, Ohio. (Photo by Gregory Shamus/Getty Images)

The Cleveland Indians are officially abandoning their Chief Wahoo logo.

The team announced Monday that it will stop using the mascot on its uniforms beginning in 2019.

The logo has long been considered racist by many, despite the fact that several fans cherish the symbol. Many universities have stopped using Native American nicknames. The St. John’s University Redmen, for example, became the Red Storm in 1994. Teams at the University of North Dakota, once known as the Fighting Sioux, have been the Fighting Hawks since 2015.

However, other teams like the NFL’s Washington Redskins have resisted increasing pressure to change their insignia.

Chief Wahoo has been used by the Indians since 1947 and first appeared on the team’s uniforms in 1948. Rob Manfred, the MLB commissioner, has been pushing for Cleveland’s chairman and chief executive Paul Dolan to make a change for the last year.

Manfred said in a statement that the Indians organization “ultimately agreed with my position that the logo is no longer appropriate for on-field use in Major League Baseball, and I appreciate Mr. Dolan’s acknowledgment that removing it from the on-field uniform by the start of the 2019 season is the right course.”

Phillip Yenyo, the executive director of the American Indian Movement of Ohio, lauded the decision as “another step in the right direction,” although he lamented that it won’t take effect until next year.

“Why wait?” said Yenyo. “If you are going to go this far and get rid of it, why not do it now?” All they are doing is testing it out, because the name has to go, too. The nickname absolutely has to go. It’s not just the logo.”

Yenyo also called for the Atlanta Braves to change their name. The Braves are among several teams — including the Florida State University Seminoles — who have drawn criticism for the so-called Tomahawk chop chant performed by fans at games.

Per the New York Times, fans will still be able to purchase items bearing the logo at Indians souvenir shops at Progressive Field and “at retail outlets in the northern Ohio market, but those items will not be available for sale on MLB’s website.”

The Indians will also reportedly still be able to profit financially off the Chief Wahoo logo.

Indians will maintain trademark and retail rights to Chief Wahoo. In other words, they’re still going to make money off him.

Under former team president Mark Shapiro in 2014, the Indians reduced the use of the Chief Wahoo logo and introduced a block “C” as the team’s main symbol. Shapiro, who is now the Toronto Blue Jays’ president, said the grinning caricature made him uncomfortable.

Small groups of protesters have regularly gathered outside Progressive Field before important games to express displeasure with the name, although these protests have largely been peaceful.

Some have gone further to rid the Indians of their logo. During the 2016 postseason, indigenous Canadian activist Douglas Cardinal sought an injunction from a Canadian court to stop Cleveland from using uniforms depicting Chief Wahoo or the team name while playing in Toronto.

The Indians team name itself is supposedly derived from Louis Sockalexis, a member of the Penobscot nation in Maine, who played for a different Cleveland team in the National League from 1897-1899.

Last year, a Supreme Court ruling in another case cleared the way for the Redskins to preserve the trademark on their logo.

CLEVELAND, OH – OCTOBER 05: Andrew Miller #24 of the Cleveland Indians delivers the pitch during the seventh inning against the New York Yankees during game one of the American League Division Series at Progressive Field on October 5, 2017 in Cleveland, Ohio. (Photo by Gregory Shamus/Getty Images)