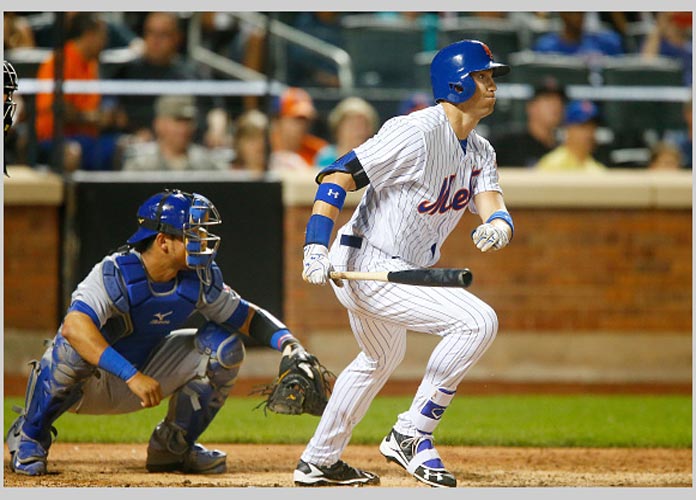 NEW YORK, NY - JUNE 30: Brandon Nimmo #9 of the New York Mets follows through on a seventh-inning, RBI base hit against the Chicago Cubs at Citi Field on June 30, 2016 in the Flushing neighborhood of the Queens borough of New York City. (Photo by Jim McIsaac/Getty Images)

When he’s not running his hedge fund or doing laps in a pool full of gold coins, Steve Cohen is trying to win a World Series as the owner of the New York Mets. In fact, this 2022-23 offseason is demonstrating that he’s hell-bent on it following an eye-watering spending spree in November and early December.

Since Steve Cohen took over he’s brought Lindor, Scherzer, Verlander, Buck, 100 win season, the black jerseys and much more. Overpaid to ensure that Diaz and Nimmo stay. He’s not done. Yeah, they’re still the #Mets. We’ve lived it, we know. Right now though? Tough to complain.

It all started on Nov. 9, when the Mets agreed to a five-year, $102 million contract with star closer Edwin Diaz, making him the highest-paid relief pitcher in MLB history. New York got their guy and fans rejoiced as the team demonstrated a willingness to spend for him. But Cohen wasn’t even close to done.

Three days after Jacob deGrom signed with the Rangers, the Mets signed three-time Cy Young winner Justin Verlander to a two-year, $86 million contract. The deal made him the highest-paid MLB pitcher for the 2023 season, tied with fellow Mets ace Max Scherzer, who received a nearly identical deal last year.

It's on to the next one for Steve Cohen. https://t.co/dZ0RfudxiF pic.twitter.com/tVSwZqok5X

Two days later, Cohen threw some spare change around and signed former White Sox star Jose Quintana for two years and $26 million. It was merely a pallet freshener for the billionaire, as the following day, the front office finally settled with center fielder Brandon Nimmo, effectively locking him down for the rest of his career with an eight-year, $162 million deal. News minutes later that the team secured highly touted reliever David Robertson on a one-year, $10 million contract felt like an afterthought.

At the beginning of the offseason, it was generally agreed that the Mets needed to secure Nimmo and Diaz, re-sign or replace deGrom and bolster the bullpen and middle rotation. In the span of a month, the team has signed Nimmo, Diaz, Verlander, Quintana and Robertson while also making a few minor trades for more arms.

To accomplish this, Cohen has gone beyond what even he considered to be the team’s budget, as New York’s projected 2023 payroll should be higher than $300 million for the first time in league history. The punchline to all of this is that he isn’t done yet.

For fans and the front office alike, Japanese starting pitcher Kodai Senga seems to be the final piece of the puzzle, a right-hander with an arsenal of pitches to accompany a 96 MPH fastball. The star foreign prospect is reportedly seeking a long-term deal with a “win now” team and the Mets have expressed an intense interest in signing him. One has to assume that they’re in the running on spending power and roster potential alone. Nothing says “win now” in baseball more than Verlander, Scherzer and a $300 million payroll.

Last offseason, Cohen’s readiness to spend sent shockwaves through the league as the Mets went from affluent underachievers to prohibitive spenders in an instant. The team didn’t live up to expectations in 2022, losing the NL East to the Braves before exiting an unceremonious Wild Card series against the Padres. But the Mets’ new owner seems to have at least one solution for that, and as long as the checks keep cashing, it’s hard not to imagine the team from Queens as a legitimate heavyweight for the foreseeable future.