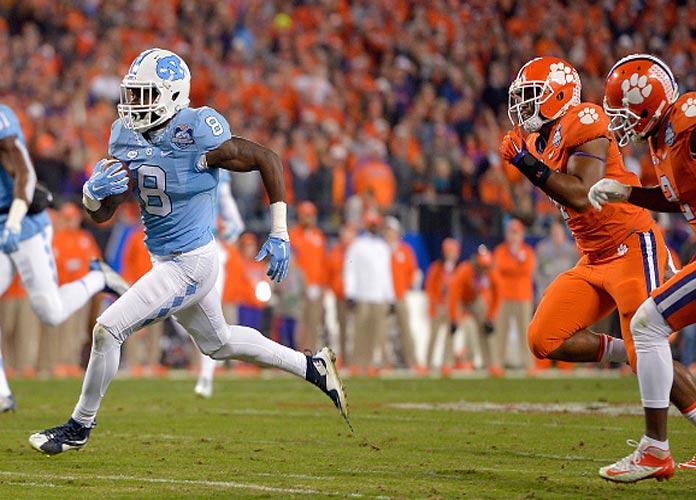 CHARLOTTE, NC - DECEMBER 05: T.J. Logan #8 of the North Carolina Tar Heels runs for a touchdown against the Clemson Tigers during the Atlantic Coast Conference Football Championship at Bank of America Stadium on December 5, 2015 in Charlotte, North Carolina. (Photo by Grant Halverson/Getty Images)

A.C.C. Pulls League Championships Out Of North Carolina In Response To Anti-LGBT Law

The Atlantic Coast Conference announced Wednesday that it would pull neutral site championships for this academic year out of North Carolina in response to a state law that discriminates against lesbian, gay, bisexual and transgender individuals.

A.C.C. Pulls League Championships Out Of North Carolina In Response To Anti-LGBT Law

Among the championships that will be moved out of the Tar Heel State include the football title game and the women’s basketball tournament.

The announcement came just two days after the N.C.A.A. revealed that it would move championship games for the upcoming year, including six in the Division I men’s basketball tournament. The N.C.A.A. received both praise from those who oppose the law and harsh criticism from supporters of the law, who claim the organization should not have meddled in politics.

“The A.C.C. Council of Presidents made it clear that the core values of this league are of the utmost importance, and the opposition to any form of discrimination is paramount,” Commissioner John Swofford said in a statement. “Today’s decision is one of principle.”

The law, also know as House Bill 2 or H.B. 2, essentially annulled local government ordinances establishing anti-discrimination protections for members of the LGBT community, and required people in publicly owned establishments to use restrooms that correspond with the gender listed on their birth certificate, as opposed to the gender these people identify with.

Swofford said Monday night that he personally felt the law should “be repealed as it’s counter to basic human rights.”

James P. Clements, president of Clemson University, said the decision came with some difficulty, and that it is in line with the anti-discrimination values of the A.C.C.

“The decision to move the neutral site championships out of North Carolina while H.B. 2 remains the law was not an easy one, but it is consistent with the shared values of inclusion and nondiscrimination at all of our institutions,” Clements said.

In a joint statement, Carol L. Folt and Randy Woodson, the chancellors of UNC and North Carolina State respectively, said: “We appreciate the Council of Presidents’ reaffirmation of the A.C.C.’s strong commitment to diversity and inclusion,” adding, “However, we regret today’s decision will negatively affect many North Carolinians, especially in the affected host communities.”

Tim Moore, the speaker of the state’s House of Representatives, stated the week’s decisions by the N.C.A.A. and the A.C.C. were “very unfortunate.”

“No one ever wants to lose events under any circumstances, but these organizations are certainly entitled to host their events wherever they choose,” said Mr. Moore, a Republican who supports H.B. 2. “The truth remains that this law was never about and does not promote discrimination.”

The A.C.C., which said it would announce future venues, has only a few weeks to relocate its first affected championship, for women’s soccer, which had been scheduled to be held in Cary starting Oct. 30. The conference also has less than three months to find a new site for its marquee event, the football championship game, scheduled for Bank of America Stadium in Charlotte on Dec. 3.

Six other championships featuring sports like men’s and women’s swimming and diving, men’s golf and baseball are scheduled to be held at in-state venues.

Certain championships hosted by specific universities will not be affected, such as the men’s and women’s cross-country championships at North Carolina State.

Aside from these championships and regular-season ACC games, the other major college sports event set to occur in North Carolina is the Belk Bowl, which will pit an A.C.C. team against one from the Southeastern Conference on Dec. 29 in Charlotte.

In late July, the NBA decided to pull the 2017 All-Star Game out of Charlotte, also citing H.B. 2 as a discriminatory law that runs counter to the league’s values.

The Charlotte Sports Foundation, which hosts the Belk Bowl and the A.C.C. football championship, said in a statement Wednesday that it was “disappointed” that the football title game was moving, adding: “We recognize the economic impact moving the game and its events have on the Charlotte area. We will continue to work to bring high impact sporting events to Charlotte in the future.”

Frank Kay, a spokesman for the host organization, stated there were no discussions about relocating the Belk Bowl.

Officials in North Carolina cities with close ties to the A.C.C., including Greensboro, have been worried about the long-term fallout from the N.C.A.A.’s decision Monday.

CHARLOTTE, NC – DECEMBER 05: T.J. Logan #8 of the North Carolina Tar Heels runs for a touchdown against the Clemson Tigers during the Atlantic Coast Conference Football Championship at Bank of America Stadium on December 5, 2015 in Charlotte, North Carolina. (Photo by Grant Halverson/Getty Images)