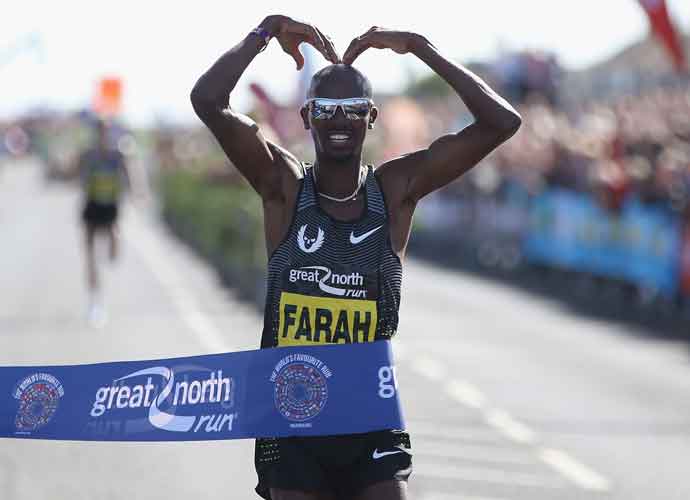 Mo Farah, a four-time Olympic distance runner from Great Britain, has revealed that he promised his two kids he would win two gold medals, one for each of them, from last summer’s Rio Olympics.

“Leading up to the Olympics I was injury free and my training had gone well, so I went into the Games feeling good and confident,” he said. “But four years is a long time in athletics. I’m getting older and it gets harder to recover between sessions, so I didn’t take anything for granted when it came to retaining my golds.”

“At the same time, you have to believe you can do it. I kept reminding myself about the hard yards I’d put in – 120 miles a week, training longer and harder than my rivals. That gave me confidence.
Plus, I had promised my kids Hussein and Rhianna that I’d win them a gold medal each, so there was no way I could let them down!”

Farah also discussed one of his less proud moments in Rio: “When I tripped in the 10k – that was honestly one of the hardest races of my life, so falling over nearly finished my chances there and then.

The whole thing happened so quickly and all I could think about was all the hard work of training and sacrifice going to waste. “I was lucky it happened quite early on and was able to get back up, to get my composure back and then get back up to speed for the final kick. When I crossed the line I was absolutely shattered – physically and emotionally exhausted. It was so great to have my wife Tania and daughter Rhianna in the crowd to celebrate with me afterwards.”
Farah, who was born in Mogadishu, Somalia, added he was hoping to peak at the World Championships in London next summer: “I would love to end my track career by winning gold in the Olympic Stadium – going back to the place where I had my greatest ever moments during London 2012.”
When asked whether he might compete in the 2020 Tokyo Olympics marathon, Farah simply said: “Never say never.”
The Brit, who has been nominated for the Laureus World Sportsman of the Year Award, said to compete for an award alongside some of the world’s greatest athletes was a “huge honor.”
“Everyone in my category — Usain, Andy, LeBron — are at the top of their game and these guys will go down as true greats of their sport,” Farah said. “To have my name amongst them is very special.”
Farah also commented on American President Donald Trump’s executive order banning Muslims from seven countries, among them his native Somalia. He has lived with his family in Portland, Oregon– where he also trains– since 2011.
“President Donald Trump seems to have made me an alien,” he said in a statement posted on Facebook.
Farah was knighted by Queen Elizabeth II on New Year’s Day 2017.
Here is his full statement:

“On 1st January this year, Her Majesty The Queen made me a Knight of the Realm. On 27th January, President Donald Trump seems to have made me an alien.

“I am a British citizen who has lived in America for the past six years — working hard, contributing to society, paying my taxes and bringing up our four children in the place they now call home. Now, me and many others like me are being told that we may not be welcome. It’s deeply troubling that I will have to tell my children that Daddy might not be able to come home — to explain why the President has introduced a policy that comes from a place of ignorance and prejudice.”

“I was welcomed into Britain from Somalia at eight years old and given the chance to succeed and realise my dreams. I have been proud to represent my country, win medals for the British people and receive the greatest honour of a knighthood. My story is an example of what can happen when you follow policies of compassion and understanding, not hate and isolation.”

Farah’s post was met with mixed reactions. Mark Parker, the CEO of Nike– which sponsors Farah– issued a statement Sunday night defending the Olympian and condemning Trump’s executive order.
“What Mo will always have — what the entire Nike family can always count on — is the support of this company,” Parker said in the statement. “. . . Now, more than ever, let’s stand up for our values and remain open and inclusive as a brand and as a company.”
The runner does not hold a Somali passport, and is not scheduled to return to Oregon until March.
Read more about:
2016 Rio Olympics Great Britain Mo Farah