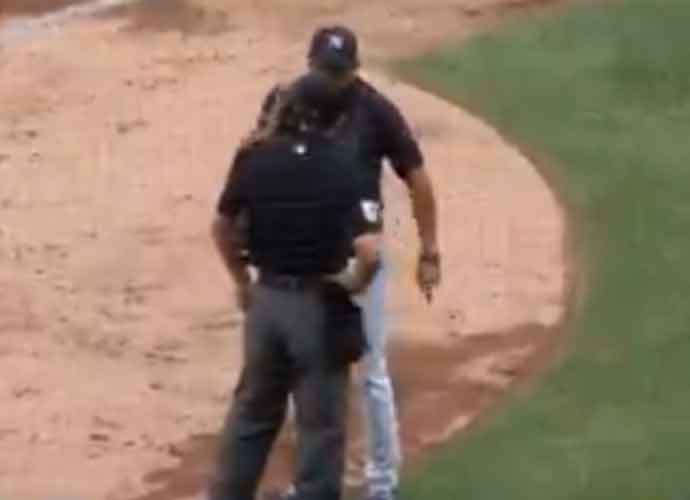 Although the New York Yankees won their first contest during Thursday’s double–header slate in the Bronx, Aaron Boone watched from the clubhouse after an earlier ejection left he Yankee dugout one man short.

After starting things off by calling out both Aaron Judge and Brett Gardner on strikes that appeared to fly far beyond each hitter’s strike zone, rookie umpire Brennan Miller began to hear rumblings from the Yankee dugout. Boone, the author of those rumblings, repeatedly offered criticisms for Miller, asking him “tighten things up” while also sprinkling in some expletives.

With an Gardner angrily smashing his bat around the Yankee dugout, Boone persisted to shout at Miller as D.J. LeMahieu took yet another called strike well outside the zone. Despite Miller acknowledging Boone’s criticisms as he repeatedly stated, “Aaron I heard you,” the Yankee skipper proceed to voice his displeasure with Brennan. Moments later, Brennan turned and ejected Boone, warranting a visit from him before exiting the field where he exclaimed, “My guys are f—ing savages in that f—ing box, right? And you’re having a piece of s— start to this game. I feel bad for you, but f—ing get better.”

Boone’s rant not only ignited the the crowd at Yankee Stadium, but also his team’s play. During an explosive fifth inning which began with a rare infield single for Gary Sanchez, the Bombers added three runs and surged into the lead. Starting pitcher Domingo German also found his groove soon after the event, shutting the door and pitching five straight scoreless innings after giving up two early home runs. An Aaron Hicks home run during the following inning stretched the lead out to four runs, as the Yankees went on to win 6–2.

“Personally, I fed off that energy. It gave me a boost to concentrate and go out there, do my job and try to get this victory for him, because he went out there and fought for us. I felt that it was my responsibility to go back out there and return the favor,” said German following the game.

First basemen Luke Voit also issued his appreciation for Boone’s fire after the day’s second game, which the Yankees also won, as he stated, “Not a lot of coaches I think would back it up and use that type of word, but I think we appreciate it — and we are a bunch of savages.”

Luke Voit: “We ARE a bunch of savages” pic.twitter.com/uryoC48DPi

In response, the MLB handed down a one–game suspension for Boone. However, don’t expect it to slow down the  “savages,” as they enter an interleague series against the Colorado Rockies this weekend, looking to add to their MLB best record.