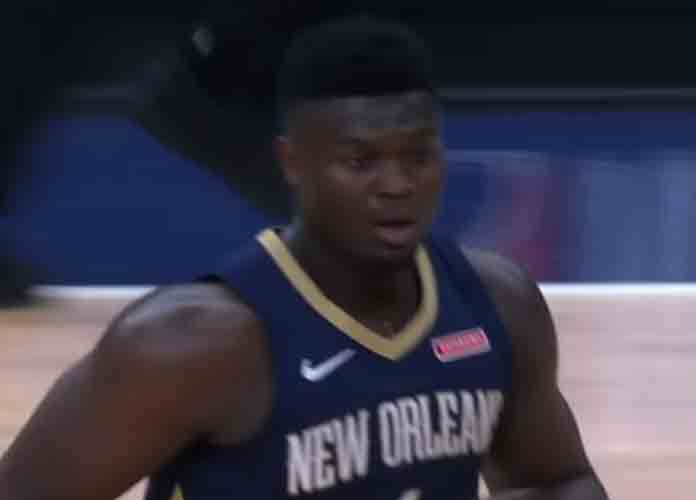 We will have to wait and see how Zion Williamson impacts the league a little longer than just the start of the NBA season. Williamson injured his knee in preseason and is expected to miss a few weeks.

He was kept out of a preseason game earlier with a sore ‘left’ knee, but apparently this injury is to his ‘right’ knee. He is expected to make a full recovery. The NBA season for the New Orleans Pelicans is set to start this coming Tuesday.

Williamson has been averaging 23.3 points per game and 6.5 rebounds. He’s got a 71.4% field goal percentage, but the majority of his shots are either dunks or shots within five feet.

There was no indication of a collision that might have caused the knee problem, which is why Pelicans Executive VP David Griffin stated they were keeping him off the roster with “an abundance of caution.”

If you recall, Williamson has had his share of injuries in his lone year at college. He very famously tore his shoe on a stop in the middle of a game, injuring his leg.

The fans that bought tickets to the home opener will be disappointed, as the Pelicans have been selling record number of tickets to the first week of the season.

Many call him the next big sensation, comparing him to the explosiveness and aggressiveness of Derrick Rose and the overall impact and court awareness of Lebron James. I’d like to compare him to another player: Blake Griffin. At least in the beginning of his career.

Like Williamson, Griffin started his career as a physical anomaly: incredibly strong, fast and vertical for his size. Griffin tore through the league, bullying and dunking his way to numbers similar to Williamson’s preseason numbers. Both played primarily around the rim.

The Pelicans rookie has nailed a three or two during games, but most of his work is below the rim. Griffin now features mid-range and deep shots as well. And although Zion only averaged 2.3 assists a game, his court awareness and passing ability are definitely advance for a rookie. He is above average with court awareness than Griffin was in his early years. But, I see a lot of parallels between the two.

We will have to wait a little longer to find out, but expect a full recovery for the 276-pound dunk machine called Zion Williamson